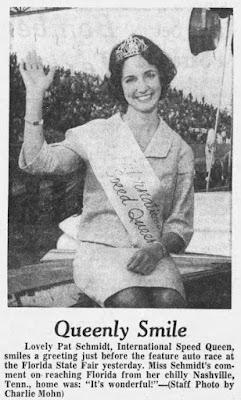 That turn in luck was a contrast to last year’s opening day event when Richert was being hoisted into the back of an ambulance after a spectacular wreck on Florida State Fair’s half-mile.

This time he was hoisted up upon his mud-splattered race car to receive a kiss from International Speed Queen Pat Schmidt, a trophy from Fair exhibiter Roland d’Albis, a hug from car owner Bill McDonald and congratulations from the 5,200 in attendance.

It was a come-from-behind type of day for Richert. He came from his fourth starting spot in the consolation to win that event and qualify for the feature. In the feature, he started seventh in a fast field and battled inch-by-inch to the front.

He rode nose to tail on Johnny White of Warren, Mich., for 14 of the 20 laps and managed to get by on sheer audacity on the white flag lap. White settled for second and IMCA champion Pete Folse of Tampa, was a puzzled third. Richert’s winning time for the race was 9 minutes and 21.72 seconds.

Richert, who finished fourth in the IMCA point standings last year, was taking his first ride in the McDonald car since destroying it in a wreck at Spencer, Iowa, last September. White joshed Richert good-naturedly for banging him from the rear all through the feature.

Folse, after walking away with the 5-lap match race and winning the second heat in championship fashion, Folse appeared almost to be a shoo-in to win the feature, but he ran out of tires and groove in the middle of the main event.

Asked if he was going to change tires for the feature, he laughed, “What? After I won two races on them and I’m sitting in the saddle, starting in the front row of the feature.”

But it was tires that beat Folse. He ran away and hid from the field for the first 10 circuits, then lost the bite in the outside groove. After that, he fought for every inch as the rest of the pack moved up and two slipped by.

There were several minor spinouts during the program with Ernie Borelli of Brooklyn, N.Y., and veteran Bert Hellmueller of Louisville bringing a united scream of anguish from the crowd with spectacular flips.

Hellmueller flipped on the south end of the track and his Ranger tossed him aside like a rag doll when his safety belt broke. He got to his feet, dazed for a moment, but quickly assured everyone that he was fine. Ten minutes later, he was fussing around his car, checking it for Saturday’s races.

Mikey Shaw of Berea, Ohio, took a Chevrolet-powered sprinter out on the track and blew over the Offenhauser’s to win the first heat win. Folse sailed to an easy win, well ahead of Arnie Knepper of Belleville, Ill., in the second heat. The Tampa fans received their little bit of satisfaction when Dick Hope came from fifth to first in the third heat. Folse won the four-car match race easily and Richert took the consolation ahead of Ted Ready of St. Paul, Minn. 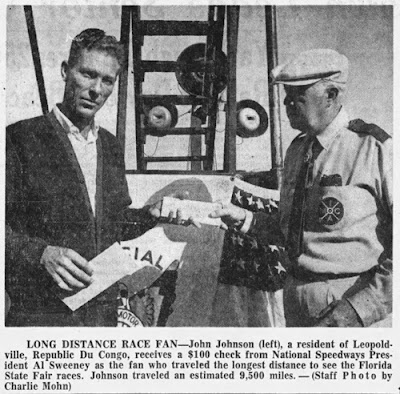 Herschel Wagner, the 42-year-old grandfather, combined the skill of a veteran and the spirit of a rookie to win the 25-lap feature in record time on Saturday, February 11, before a record crowd of 10,640.

The Hickman Hills, Mo., driver broke a five-year-old record with his time of 11 minutes and 45.92 seconds for the 25 laps and must have broken a few hearts along the way. He passed all but two of the 16 starters before he was waved with the checkered flag by starter Johnny Hicks.

While Wagner was way out front running his own race, one Michigan driver and another from Minnesota were staging their own wheel-to-wheel battle just like the Wednesday before. But this time, Johnny white came out ahead of Jerry Richert, finishing second and third, respectively,

Heats were won by Mickey Shaw, Arnie Knepper, and Al Logan of Los Angeles. Bud Sterrett of Los Angeles was the 5-lap match race winner and also won the consolation.

Pete Folse was dogged by misfortune again. He burned a piston in the middle of the second heat and was out for the day. Local favorite Dick Hope was also a victim of breakdown as the driveshaft on his Chevy broke and put hi out of commission.

In the feature, Wagner found the groove on the high side, and he painted the concrete retaining wall and top board fence with hundreds of pounds of dirt from his digging tires.

“Folse and I decided to stick to knobbies this time no matter what,” Wagner explained. “We did it last time, of course, and lost out.”

“Things may have been different if Pete had been in the race and we both had the same tires.”

Wagner climbed out his Thomas Offy to get away from the heat. He was told of his record time as he stood on the cool damp clay surface in his boxing shoes that he wears for driving.

The record was originally held by Bobby Grim, who set it in February of 1957 in the Honore Offy. It was 11 minutes and 50.72 seconds, almost five seconds slower. 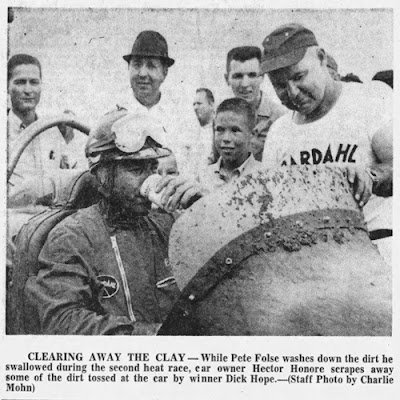 Pete Folse would finally get his licks in, winning his first feature event on the third day of the four-race Winternational Sprints series on Wednesday, February 14.

Folse took no chances with victory, jumping to the front as the green flag dropped and staying there for the full 20 laps. Herschel Wagner lined up behind Folse in the starting field and rode with him the entire distance.

Earlier, Folse won the second heat, charging to the front like a bucking bronc. He finished third in the four-car match race.

Arnie Knepper drove the Moca Offy to the win in the first heat and Ed Terry of Plainville, N.J., was first in the third heat in the Kurtis Special. Bud Sterrett won the match race in the Wilson Offy and Wagner won the 10-lap consolation.

Folse and Wagner dueled several times for the advantage at the start of the feature, causing Johnny Hicks to withhold the green flag and brining the partisan crowd of 5,000 to their feet. But Folse persisted, the flag waved, and Folse looked like he had been shot out of a cannon.

Folse had several things going for him. He was geared low for the quick getaway, and he had a special pair of dragster tires with a special type of tread on the rear wheels. The wide tires gave him plenty of traction in the turns and straightaways to keep Wagner from mounting any serious challenge. For his part, Wagner seemed pretty content to let Folse do his thing and concentrate on keeping his own position on the slick track.

The battle of the feature was between Johnny White in the Wilson Offy and Dick Hope in the Johnson Chevy. Hope started in the 12th position and dodged, battled, slipped, and slid up to the fourth spot. He pulled up on White with three laps to go and they waged a spine-tingling exchange of wheels right down to the checkered flag.

At the end, White was in front of Hope by mere inches at the finish line. 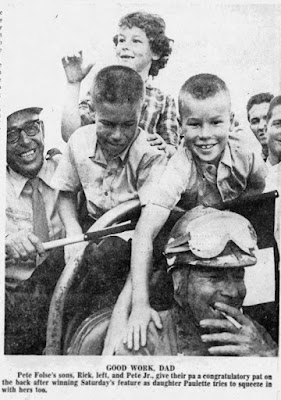 Folse would battle a determined youngster, a tough track, and a mangled front end on the Honore Offenhauser, but emerged the feature winner and point champion as the Winternational Sprints came to a close on February 17.

The determined youngster was Johnny Rutherford of Fort Worth, Tex., driving the Beatson Chevy. Rutherford said after the race had there been one more lap, he would have been able to pass the three-time IMCA champion.

The tough track was a maze of grooves, with every driver trying to find his own place to run. As Folse said of his tire selection, “We guessed wrong on the tires again but at least they held up this time.”

The mangled front end was a bent front axle, a bent radius rod and a broken shock absorber, the result of a tangle in the match race.

“It sure made it hard to drive,” Hector Honore remarked after the race.” It sure wore Pete out.”

But it was a happy Folse that patiently signed autographs for fans for well over an hour afterwards. The champion came out of the four days of competition in the lead for his fourth IMCA crown and picked up 130 points to claim the Florida State championship for the third year in a row, winning in a squeaker over Herschel Wagner by 10 points.

Rutherford, starting in the fourth spot, pulled up to third on the second lap, second on lap 16, and closed up on Folse with only three laps to go. He almost nudged in front on the final round, but Folse managed to pull in front with a big sweep around the outside of the final two turns.

Arnie Knepper came up to get in the battle in the late laps and finished a close third. Wagner was fourth and Hope finished fifth.

The match race, shortened when three of the four cars tangled in the south turn, was won by Jerry Richert and Johnny White won the consolation.

The next day, it was announced that Al Sweeney and National Speedways, Inc., would extend the Winternational Sprints from four days of racing to five days starting in 1963. 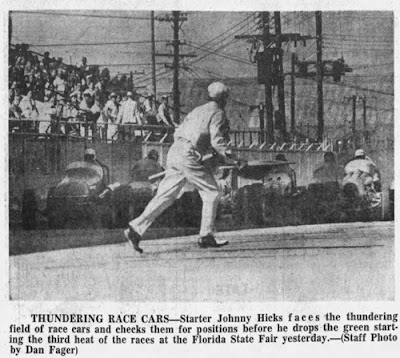