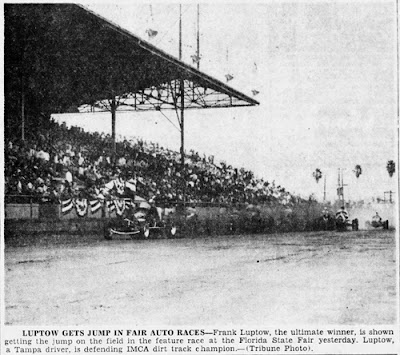 Tampa, Fla. – Frank Luptow of Tampa would make a strong start in defense of his IMCA crown during the Winternational Sprints opener at the Florida State Fair on January 30. Luptow would please a crowd of 4,500 by setting fast time, winning his heat, and taking the 15-lap main event.

Tampa-based drivers fared well in the main event, taking three out of the first four places. Finishing a close second was Eddie Adams in the Shallenberger Hal. Sid Bufkin of Mt. Carmel, Ill., was third in the Wilson Ranger and Al Funderburk was fourth in the Hukle Ranger.

Luptow went unchallenged during the first few laps of the feature, taking a quick lead from his pole position. Midway in the race, Adams pulled up on the rear bumper of his Black Panther and hung there the rest of the way, drawing almost even on the final lap.

At the finish, Luptow was a car length ahead of Adams when the checkered flew. Adams was almost half a lap ahead of Bufkin. The time of the 7.5-miler was 7 minutes and 18.99 seconds. Luptow’s time trial lap was 25.78 seconds, just .11 of a second off the track record.

Other heat races were won by Floyd Duvall of Evansville, Ind., and Red Bowen of Tampa. Wayne “Speed” Wynn of Tampa won the invitational dash, and the consolation went to Bufkin.

Luptow would make it two in a row on Saturday, February 3, winning at Plant Field before 5,500 spectators. The slim Tampan, scored victories just as decisively as he did in the opener, even though forced to start dead last in both of the races he was victorious in.

Bert Hellmueller of Louisville, Ky., and Pancho Alvarez, the daring driver from Tampa, were Luptow’s chief competitors in the 15-lapper. Alvarez started on the pole position and gunned away to the lead right away. He rode hard to stay in front, but Luptow and his powerful Black Panther Offy shot to the front of the field by lap 6 and stayed there for the remainder of the race.

Lap 13 would prove unlucky for Alvarez as his Zanal Ranger started coughing and Hellmueller came through to pass him in the Shaw Kurtis. Finishing behind them were Dick Linder of Pittsburgh, in the Ardun Special.

A heavy track made it difficult for drivers as they came into the pits after races with their machines covered in the sticky clay. It was particularly tough on Luptow because he was starting from the tail of the field.

Luptow did not wait too long to make his bid in the feature, roaring off the wave of the green flag and going from his starting 12th position to sixth place after the first set of turns. He was fourth at the end of lap 1 and second to Alvarez as they flashed past the grandstand on lap 2.

Alvarez pushed his car for every bit of speed he could, making Luptow eat clay for three more laps before he shot into the lead on the backstretch. The official time for the feature was 7 minutes and 47.51 seconds.

In addition to Luptow’s win in the first heat, Iggy Katona of Azalea, Mich., and Bob Carpenter were also heat winners. The 8-lap consolation was won by Speed Wynn. 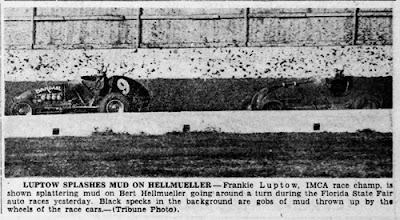 Luptow would make it a clean sweep of the Winternational Sprints competition, winning the series finale on Saturday, February 10, before 7,000 race fans. In addition to winning the 15-lap feature, the chauffeur of the Black Panther Offenhauser also won the first heat.

The defending IMCA champion had to work hard again for the victory, starting from the tail of the field. He worked his way to ninth by the first lap and jumping to third place by lap 3. He crept up behind race leader Eddie Adams in the next turn of the track and came through in the lead on lap 6.

Bob Carpenter had led the first four laps and was proving tough to pass as he went into the turns low and swung out wide coming out. Adams made several attempts to get by but was cut off, but the little speedster roared past Carpenter on the north turn to take the lead until Luptow would snatch it away a lap later.

Harry King would have the same trouble with Carpenter, fighting it out for third place late in the race. The Seymour, Ind., driver would simply bully his way ahead, smacking the rear of Carpenter’s car. After that, Carpenter pulled aside and let the whole field go by him.

After having won every event that he entered over the three days of racing, Frank Luptow was crowned the 1951 Winternational Sprints champion.