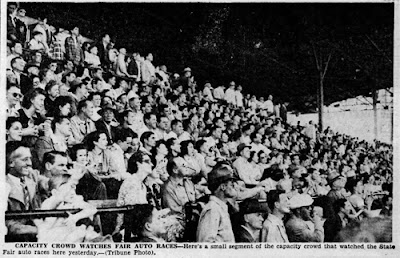 Tampa, Fla. – Deb Snyder of Kent, Ohio, displayed the speed that made him one of the top drivers in the nation, winning the season-opening 10-lap feature of the Winternational Sprints on Tuesday, February 3. Snyder also turned the best qualifying time, racing around the Plant Field half-mile in 27.08 seconds.

Red Redmond, the Atlanta driver whose made a name for himself in the Tampa racing scene, finished second and Frank Luptow of Detroit, who was second fastest in time trials, finished third.

Snyder pushed his Offenhauser to a great lead on the first lap of the feature and he stayed well ahead of all challengers for 10 circuits. Luptow rode in second place for the first eight laps before Redmond snuck by on the 9th lap. Time for the feature was 5 minutes and 54.11 seconds,

Promoters Al Sweeney and Gaylord White ran off two third heats and paid double money after a mix-up in the start on the first run. Starter Sweeney gave the field the green flag even though the three inside starting cars were not properly lined up. Sweeney waved the cars on to the finish with Adams finishing first, Fritz Tegtmeier of Elgin, Ill., second and Kid Schipman of Tampa in third.

In answer to protest from both the fans and the drivers, Sweeney and White gave the same cars another race and full purses for both races. The second version of the third heat was won by McGee, with Adams second and Richard Diaz third.

One of the biggest crowds ever to watch auto races at Plant Field turned out on Saturday, February 7, saw Harry King of Detroit nose out Deb Snyder in the feature event before an estimated 12,000 spectators. Snyder would settle for second place while Frank Luptow took third. The rest of the field was well behind at the end of the 10-lapper.

The track was in better shape than the opener but still had a couple of holes in the north turn that sent several cars into the wall after hitting some ruts.

Snyder took the lead in the feature from his pole position and was well in front, but on the fifth lap, hit one of those ruts in the north turn, got loose and slapped the wall. By the time Snyder recovered, King had sped past and into the lead he wouldn’t relinquish.

King would cross the start/finish with a convincing 10-car length lead at the checkered. Time for the race was 5 minutes and 1.21 seconds, nearly a second faster than Snyder’s winning time in the opener.

Editor’s Note: Snyder was so incensed over losing this race, he petitioned Florida State Fairboard officials and “demanded” that something be done about the racing surface. He complained that the track had been ironed and baked so hard that the tires on his Offenhauser were unable to get any traction. His opinion was shared by Frank Luptow, also driving an Offy. He was quickly advised to look for no favors from anybody except maybe the weatherman. 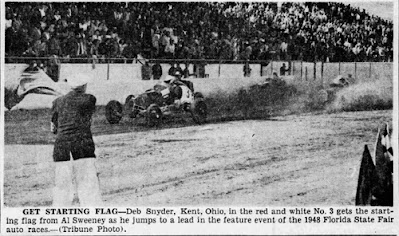 Snyder wouldn’t have anything to complain about after the third leg of the Winternational Sprints on Saturday, February 13. The Ohio speed monarch took the feature event when lady luck deserted front-running Frank Luptow, who was forced out on the final lap. Harry King would finish second, and Al Ketter was third

Luptow, after taking the lead in the first turn of the first lap, and staying in front, would drop out with a mechanical failure. Up until that point, it appeared to be Luptow’s race as he shook off repeated challenges from Snyder for the first five circuits and then pulled out to a healthy lead. Coming out of the south turn on the final lap, the rear end of his Black Panther Offy broke and sprayed Luptow with oil.

Snyder suddenly found himself in first place and taking Al Sweeney’s checkered flag. Harry King, after a spirited battle with Red Redmond earlier, took second place money and Al Ketter was way ahead of Eddie Adams for third place. Time for the race was 4 minutes and 59.53 seconds, half a second faster than last week’s race.

The heat races were won by Luptow, King and Ketter. Snyder took the match race and Al Flemming won the Australian Pursuit race.

The closest race of the afternoon was the three-car match race, with Luptow, Snyder and King participating. Luptow had led the way with what seemed like an overwhelming lead. Snyder, however, gunned his red and white Offy on the final set of turns, and powered his way past Luptow on the front stretch to win by mere inches. The crowd was in doubt of the finish until it was announced by judges. 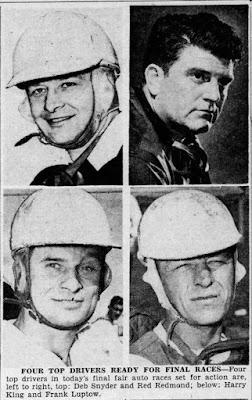 The fourth and final leg of the Winternational Sprints would see the two favorites, Deb Snyder, and Frank Luptow, drop out, giving Eddie Adams the 12-lap feature win over Harry King. Adams passed King on lap 9 for the lead after eating the Atlantan’s dust for most of the race. King would settle for second while Red Redmond was third.

Snyder would smack the north wall in his heat race, bending a rear wheel. With no chance of starting the field better than the seventh position, Snyder quit in disgust and wheeled his car to the pit area. Luptow had magneto problems but worked furiously the entire afternoon in time for the consolation race. He overhauled the car twice, but luck wasn’t with him, and his wheels locked, spinning him into the wall and out of the race.

Although Adams and King put on quite the show, it was Red Redmond who drove the most spectacular race as he worked his way from his seventh starting position to close within a car length of King at the finish.

Heat races were won by King, Wayne “Speed” Wynn, and Redmond. A.V. Moorelock of Macon, Ga., won the consolation but burn his motor out and was unable to start the feature.

The program lined up to be one of the most mixed-up fields ever seen at Plant Field, with some lesser-known cars qualifying in the top positions on the brick-hard clay surface. The top time was turned in by King with a time of 29.61 seconds for the half-mile lap. Adams was second fastest while the always consistent Snyder was way back in the 11th spot.