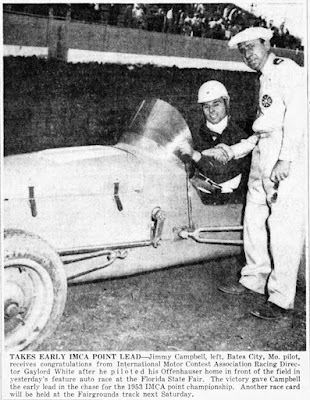 Tampa, Fla. – Jimmy Campbell, the grinning Batesville, Mo., daredevil who captured the National Speedways’ championship in 1952, would be one leg up on the competition, registering a hard-fought win in the 1953 Winternational Sprints opening day at the Florida State Fair on Wednesday, February 4.

With a crowd of 4,500 looking on, Campbell grabbed an early lead in his purring Offenhauser and was never in any danger of being caught until the checkers dropped 15 laps later. At the checkered, only two car lengths of daytime were showing between his exhaust and the front end of youngster Bobby Grim of Indianapolis.

After Campbell and Grim, the rest of the field was pretty well strung out with Bob Carpenter of Wabash, Ind., finishing a distant third in a Wilson Ranger.

Two of the pre-race favorites, Pete Folse of Tampa, and Bob Slater of Redfield, Kan., lasted only one lap of the event. Motor trouble sidelined Folse, and an injury sent Slater to the pit area. Slater was struck in the face by a kicked up by another car and he suffered a severe gash to the face.

Tampa drivers finished one-two in the Florida State Championship race with Home Claytor covering the 5 miles in 5 minutes and 14.81 seconds. Folse was second and Stan Callaway of Miami was third.

Heat winners were Slater, Jim McWithey of Anderson, Ind., and Marvin Pifer of Adrian, Mich. Herschel Wagner of Hickman Hills, Mo., was the consolation winner. Pete Folse set the fastest time, touring the half-mile in 27.40 seconds, earning him the feature pole position for all three days of racing.

Heavy rains would wash out the program on Saturday, February 8. Fans did see the top-12 drivers compete in heat races before rains made a quagmire of the track.

Jimmy Campbell won the first heat by inches over Bob Carpenter while Bob Slater made his win in the second heat look easy. Don Carr of Jackson, Mich., took the third heat just as a slow drizzle started making the racing surface slick.

National Speedways, Inc., co-promoters Gaylord White and Al Sweeney called the action shortly thereafter when the rains became heavy, and the forecast called for the wet stuff the rest of the afternoon.

Pete Folse would win the finale on Saturday, February 14, in a crash-filled feature witnessed by 5,800 race fans. Folse, driving the Buckner Offy, caught the checkered flag just ahead of Bob Slater and Bobby Grim.

In the confusion that followed a crash by Jim McWithey into the grandstand wall, the race was flagged on the 19th lap instead of the scheduled 20. McWithey jumped from the car, unscathed.

The crashes started before the program even got underway as Cush Revette and Slater each smacked the concrete retaining wall during warmups. Marvin Pifer spun and narrowly missed the wall.

During the second heat, opening day winner Jimmy Campbell ran up over the rear of Pifer and climbed the wall. His Offy took out an entire chunk of board fence topping the cement wall and his car was badly damaged although Campbell was uninjured.

Campbell was also involved in the tangle with McWithey when he crashed in front of the grandstands towards the end of the main event. He limped into the pits without even taking the checkered flag.

Campbell, who was forced to start at the rear of the field because he didn’t qualify his patched-up racer until the consolation, worked hard to get into one of the top spots. He started 13th in the 14-car field and was apparently on his way to the front when he was caught behind McWithey and Carpenter. The three drivers raced in a tight knot, with Blundy pulling up with them occasionally, until the tangle on lap 19.

Slater took a short-lived lead at the beginning of the feature, but by the second lap, Folse came up to ride in front the rest of the way. Slater settled into second and stayed there, while Grim picked his third spot on the third lap and rode it out from there.