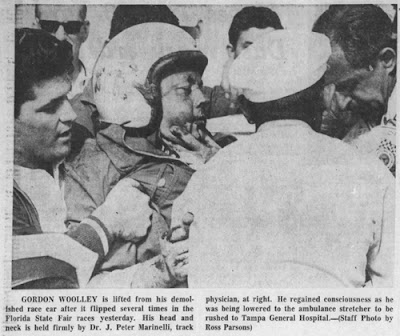 Tampa, Fla. – By the time the 1964 IMCA Winternational Sprints were only one and a half laps old, the defending IMCA national sprint car champion was headed to the hospital by way of ambulance and the 1961 champion was headed home to tell his wife he wasn’t injured in a wreck.

Woolley suffered a fracture of a neck vertebrae, facial cuts, and bruises. Dr. J. Peter Marinelli, the track physician, said Woolley would be in traction for at least four or five days and may be hospitalized, “for about six to eight weeks.”

Woolley’s car was destroyed and out for the rest of the series, Folse’s car was expected back on Wednesday.

Woolley flipped his car on the backstretch on the second lap of the first heat. But Folse won the distinction of having the initial crackup of the new year. His came immediately after start Johnny Hicks’ green flag, smack dab in front of the Plant Field grandstand.

Folse, running in the rear of the field and on the outside, tried to cut down in front of the field before the first turn. He was nicked by Jerry Richert’s left front tire. The Thomas Offy’s rear end lifted, then the car rolled over once sideways, followed by three end-over-end flips. The car wound up in the pit area, on its side, knocking down but not injuring a television cameraman. Folse was uninjured.

After regrouping, the first heat took off again, minus Folse. On the backstretch of the second lap, Woolley rode up on Richert’s tire and rolled over three times. His escape was miraculous. As the car rolled, he appeared to be flailed against the track with each bounce of the cockpit. He was unconscious and bleeding about the face for a time but recovered consciousness as he left in the ambulance.

Even feature winner Jerry Richert of Forest Lake, Minn., finished the race in agony that sent him reeling and tumbling to the ground after he climbed from his race car with his feet and legs burned by hot oil. He laid on the edge of the track, each hand squeezed in a hard handclasp of a kneeling crewmember while his driving shoes were tugged from his feet.

In his 25-lap charge around the rough half-mile, he lapped every car in the field except two. Those two, Jerry Blundy of Galesburg, Ill., and Greg Weld of Kansas City, finished in that order. All three drivers were wheeling Chevrolet-powered cars.

He squeezed past by Blundy on lap 21, when the later appeared to be blinded by a shower of dirt from cars they were passing. Until that point, Blundy looked a like a sure winner.

Someone asked Folse afterwards if he had passed anyone before the wreck. “If I did, it was in the air,” he replied. 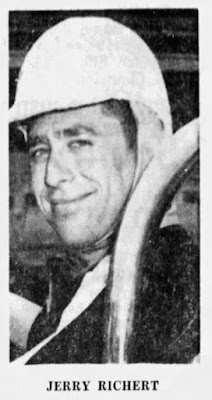 Richert would make it back-to-back when the Minnesota speedster won the 20-lap feature on Wednesday, February 12, before a slim mid-week crowd. He would also capture the 5-lap match race.

Favoring the low groove in getting to the front, he stayed with his choice to the very finish. While he drove tight on the inside of the turns, other drivers made exploratory dashes around the rim of the track until the outside was too dry for any traction.

The grinning Richert described his win as “a little bit easier,” than the one on Sunday when hot oil cooked his feet. “We got a new engine in the car,” he said. “And its running great.”

Jerry Daniels of St. Paul, Minn., stayed with Richert from the start, coming up to the front on the same turn with him and worrying him with terrier-like dashes to get by in the late laps. “There was a wide groove out there in the beginning and I was afraid Scratch (Daniels) would get by on the outside,” Richert commented.

While most of the crowd was watching Richert charge into the lead and Daniels’ throw dirt high, steady Harold Leep of Wichita, Kan., picked off those in front of him like a marksman at a shooting gallery. Leep, supposedly retiring to less rigorous work of operating a bowling alley in Wichita, started 10th in the field, worked his way through the field and even gave Daniels a strong run for second.

Heat winners were Buzz Barton of Tampa, Gordon Herring of Golden, Colo., and Walt McWhorter of Wichita, Kan. Jimmy Maguire of Dunellen, N.J., with his eyes still black from a rock that hit him in Sunday’s feature, won the consolation.
Pete Folse, after flipping in the season opener, road a rail around the Florida State Fair half-mile track to win the IMCA sprint car feature on Sunday, February 15.

The feature, scheduled for 30 laps, was brought to an abrupt half after 20 laps when Jerry Blundy flipped several times and a flying wheel from his race car whipped up into the telephone and power lines, putting them out of service for more than an hour.

The wheel landed on top of one of the exhibit buildings and Blundy landed in an area hospital with possible broken arm and other minor injuries.

In gaining his first feature win of the 1964 Winternational Sprints, Folse shook off the challenges of Jimmy Maguire, who in turn was dogged all the way by two-time winner Jerry Richert. They were running in that order from the drop of the green flag until the red flag brought the contest to a sudden halt.

With his feature win, Folse made a 1-2-3 combination for the day with a win in the feature, a second in the consolation and a third in the STP trophy dash.

Folse, a bit winded after his victory, was only interested in talking about the injured Blundy than his own victory.

“Something must have happened to his car,” Folse said. “He’s a heady young man, he wouldn’t do anything foolish.”

It was all Jerry Richert again as the Winternational Sprints finished a four-race stand on Sunday, February 17. Richert not only won the 30-lap feature race, his third victory in the series, but he made it look so easy it appeared when he took over the lead on lap 5. In addition to his feature win, he won his heat and finished second in the trophy dash.

It was another thrill show for the 6,500 in attendance, with more flips and spins on the tricky half-mile dirt track.

Karl Busson of Toledo, Ohio, took a series of six rolls and end-over-end flips in the third heat after riding over Dick Mealy’s car. The final flip smashed the car upside down, crushing the roll bar on the driver Busson was pinned in the wreckage until a wrecker could pry the bar away. An early check of injuries showed a broken finger and lacerations on the face.

During the consolation, Gary Costin of Oak Grove, Mo., tangled wheels with Bill Brown and flipped twice after slapping up against the outside wall on the same north turn.

It was a jubilant Richert that rode under Johnny Hicks’ checkered flag at the finish of 30 laps. He hopped out of his car and hugged each of the car owners (Wagner, Johnson, and Wilson) with such fervor that it drew a chuckle from the crowd.

However, he was a little more bashful receiving his kiss from the speed queen and the two trophies, one for the feature win and the other as the Florida State champion.

It was the easiest victory of the two weeks for Richert. He started in the third position, nipping at Jimmy Maguire while Pete Folse built himself a lead. Richert kept the pressure so tight that Maguire spun out on lap 3and was out of the race. Richert then started on Folse and took the lead on the fifth lap with a charge around the outside groove of the track.

After that, he sat back and counted laps as they were signaled to him by his crew. Folse finished second and hard-working Harold Leep was third.

Afterwards, Richert conceded that he was more concerned with Maguire than Folse. “Maguire could haul it down the straightaways with me,” he said. “I figured I could get Pete because I was sticking my car great in the turns.”

Richert came from the last row to win the first heat. Al Unser of Albuquerque, N.M., won the second heat over Bill Roynon and Jim Moughan. Shady McWhorter of Fort Worth, Tex., made a late bid and won the third heat. Maguire won the 5-lap match race and Carl Williams won the consolation. 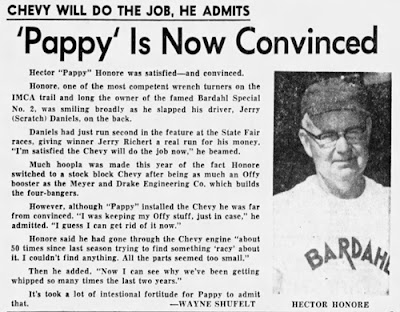