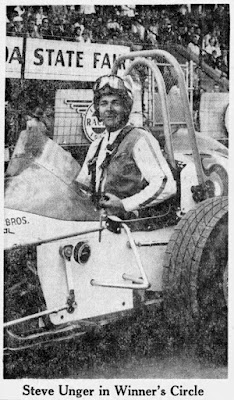 Tampa, Fla. – Steve Ungar, a balding 39-year-old from Garrettsville, Ohio, turned several firsts into a first in the opening day program of the Winternational Sprints on February 12.

Ungar flipped while attempting his first qualifying run in the early afternoon but came back later to post the fastest time of the day with a lap of 26.77 seconds. Oddly enough, it was the first time behind the wheel of the Long Brothers #55 car he was driving and also his first time competing at the Florida State Fairgrounds’ half-mile.

He started on the pole and led all 30 laps of the main event, with Darl Harrison of Beltsville, Ohio, finishing second, followed by Dick Kelm of Clinton, Penn., Jerry Daniels of St. Paul, Minn., and Bill Puterbaugh of Roxana, Ill.

“I was wondering about even qualifying for the feature,” said a grinning Ungar, still carrying lipstick prints from the speed queen. The car was handling great, I didn’t have any trouble there.”

When he flipped in time trials, he explained that he tried to go too deep into the first turn and the car went into a drift. It was too far gone for him to correct, and he went over three times.

“When I flipped during time trials, that was defintely the driver, not the car,” he laughed.

Not so lucky was Bill Brown of Denville, N.J., who made five rolling, end over end, turns during the consolation. The car was demolished, and Brown was unconscious when lifted from the machine. A spokesman at the area hospital said x-rays showed no broken bones but he was held overnight for observation.

Heat winners during the afternoon were Buzz Barton of Tampa, Jerry Blundy of Galesburg, Ill., and Frank Riddle of Tampa. The unfortunate Brown won the match race and Darl Harrison won the consolation.

Rain had forced two postponements of the International Motor Contest Association season opener for sprint cars, but the weatherman cooperated on Saturday afternoon and a record single-day crowd of 10,658 enjoyed an action-packed day of racing. 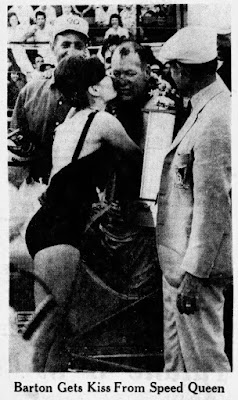 Emmitt “Buzz” Barton lost a tire but won a feature race on the second day of the Winternational Sprints, and then played tit-for-tat with Karl Busson on Sunday afternoon, February 12.

It all began with the start of the feature race. Barton, a Tampa native and fan favorite, grabbed an early lead in the 30-lap contest and kept it to the checkered flag. After which, Barton collected a kiss from the speed queen, his trophy, and a protest from second-place finisher Karl Busson of Toledo, Ohio.

Busson’s claimed Barton’s tires didn’t meet IMCA standards, so officials pulled all four off of the Ford-powered sprint car and measured. Sure enough, Barton’s wheel measured over the maximum 10 inches prescribed by IMCA – but only by a fraction.

Since the measurement was close to regulations, officials decided to wait overnight and measure the wheel again on Monday morning. But when they asked Barton for his wheel a second time, the stocky pilot explained it had become, “lost.”

Barton then filed a protest against Busson, claiming his roll bar wasn’t up to snuff. Busson then withdrew his wheel measurement complaint and Barton quickly followed with his withdraw as well. All well that ends well.

It ended up Barton collected $550 for winning the event and laying claim to a new track record for 30 laps of 13 minutes and 36.27 seconds.

Other winners were Bruce Walkup of Downey, Calif., in the first heat; Tom Corbin of Carrollton, Mo., in the second heat; Grady Wade if Wichita, Kan., in the third heat, and Dick Kelm in the match race.

Jerry “Scratch” Daniels would ride the narrow groove to win the 30-lap feature during the third leg of the Winternational Sprints on February 15. A somewhat sparse crowd of 5,802 watched the action.

Starting on the pole position with the fastest qualifying time, Daniels jumped to the front at the start and was never in any serious trouble. Only a mental lapse could have beaten him on the one-groove track. Finishing second was Karl Busson and taking third was Bill Puterbaugh.

Daniels, who also won the consolation, said afterwards, “You really had to watch it out there today. One goof up and they would’ve had you.”

Jerry Richert of Forest Lake, Minn., the defending IMCA national sprint car champion, won the first heat but dropped out early in the feature. Gordon Woolley of Waco, Tex., the former one-time champ, won the second heat. Don Hewitt of Troy, Ohio, who slapped his Chevy into the wall on the second lap of his qualifying run, thus breaking his front axle, performed a quick welding job and then outran his competition to win the third heat. Tom Bigelow of Whitewater, Wis., finished first in the 5-lap match race.

Buzz Barton, who had carried the Winternationals’ point lead entering the program, got into a wheel-to-wheel, bumper-to-bumper battle with Gus Linder during the fourth heat that got a little hostile with both driver’s tempers getting heated after they tangled, causing each other to spin out, and eliminating them from the feature. Linder was fined $25 afterwards for aggressive driving by IMCA officials.

Daniels would score his second straight Winternationals victory on Saturday, February 18, but had to withstand the constant challenges of Jerry Poland of Sommerville, Ohio, for the full 50 laps.

It was Poland all over Daniels’ tailpipe as they sped under starter Johnny Hick’s checkered flag with Tom Bigelow a close third. The 25-mile race took 27 minutes and 16.57 seconds, slowed by 14 laps run under caution.

“It was a follow the leader type of track today,” Daniels said as he stood in victory circle. “Just like the last race, as long as you don’t goof up, they can’t get by.”

The first part of the feature was the most colorful as spinning cars brought out the caution three different times. On the second lap, Bill Puterbaugh and Gordon Woolley hooked up in a spin that caused no damage. Two laps later, Puterbaugh and Ralph Blackett of Leonard Wood, Mo., in the same turn and this time Puterbaugh was out with a broke wheel. After two more racing laps, Bobby Adamson of Coraopolis, Penn., lost a rear wheel in the fourth turn and brought out the yellow flag again.

Each time, Daniels was forced to gun hard at the restart to maintain his lead position but did so to perfection.

Jerry Richert won the first heat while Buzz Barton won the second heat and Rollie Beale of Toledo, Ohio, was the third heat winner. The consolation went to Karl Busson. 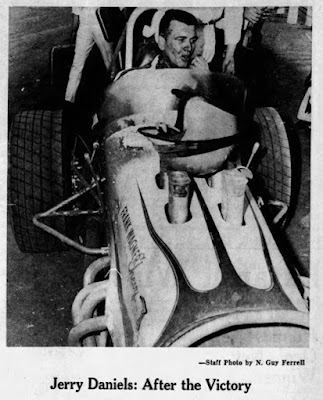 Jerry Richert took the high road and Jerry Daniels took the low row during the 30-lap finale of the Winternational Sprints on Sunday, February 19. The “Minnesota Twins” planned to meet in front of the Plant Field grandstands where each hoped to collect the booty from the final day.

Only Daniels made the scene…

The 27-year-old plumber’s assistant gunned his Wagner Chevy to a new 30-lap track record to capture the feature race, his third straight win, and annex the overall point championship for the five days of competition.

Daniels broke Buzz Barton’s 30-lap record by more than a second. Barton’s record had stood since 1965.

Richert’s bid in the feature to run around the track’s high edge failed and the defending IMCA champion dropped out about midway through the race. His teammate and fellow Minnesota native Daniels stuck with the hard and slick inside groove of the dirt track and stretched his pole position leading to a comfortable winning margin.

After the race, Daniels collected an extra kiss from the speed queen - at his own insistence – and declared he wasn’t the celebrating type.

“I don’t guess I’ll do much celebrating tonight,” the crewcut father of three confided. “You see, I don’t drink.”

Sunday’s heats were won by Richert, Rollie Beale and Harold Leep of Wichita, Kan. Tom Bigelow won the match race and Karl Busson won the 10-lap Jud Larson Memorial race, honoring the former Tampa resident that perished in a crash In July of ’66.

There was another winner at the races as well. Al Sweeney, president of National Speedways, Inc., noted that the crowds that turned out for the ’67 Winternational Sprints as “near record turnouts.”

The 37,012 that witnessed the five days of racing was 1,700 less that the total crowd which saw the races last year. Sweeney blamed the rain that hit the first two days of scheduled racing but called the event “a success all down the line.”