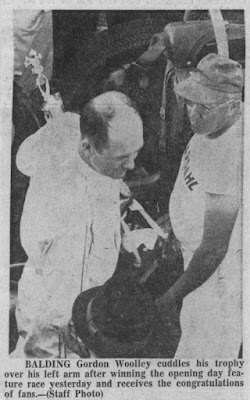 Tampa, Fla. – Gordon Woolley, the balding gentleman from Waco, Tex., turned the tables on Lady Luck at the Florida State Fair on Wednesday and picked up $605 for winning the feature and consolation during the IMCA sprint car season opener at the Winternational Sprints.

Last year, Woolley started the season at the Winternationals involved in a bad wreck, and that seemed to set the tone for the rest of the season, getting in several more serious accidents that finally forced a doctor to put an end to Woolley’s racing for the rest of 1964.

By the end of the program, it was a smiling Woolley who posed with speed queen Cookie Benken and car owner Hector Honore of Pana, Ill., to receive the 5-foot-high trophy.

“I believe things will change this year,” said the 42-year-old Woolley, the 1963 IMCA national champion. “I started bad here last year and just went downhill from there. Maybe this good start means that’ll I’ll get the championship back. I know Hector would love that.”

Finishing second in the 20-lap series opener was Jim McCune of Toledo, Ohio, the second ranking driver in the 1964 point standings. Third place went to Dave Lundy, a 31-year-old newcomer from Pittsburgh.

Heat wins were scored by Larry Cannon of Danville, Ill., Bill Brown of Danville, N.J., and Wib Spaulding of Granite City, Ill. Buzz Barton of Tampa was the consolation winner.

Starting on the pole position, Woolley was challenged repeatedly in the feature by Barton. Twice, they hooked wheels on the home stretch as they jockeyed for position and both times, Barton’s car swung out and bounced off the outer wall. The second time, Barton’s car swung sideways in front of onrushing traffic as he headed for the pit area. Mechanics and officials scattered in every direction as Barton pulled in, but he managed to keep control and bring the car to a halt.

Woolley said he wasn’t aware that it was Barton with whom he tangled with. “Was that Barton?” he asked quizzically. “I felt the bump and I knew I wasn’t that close to the wall. It happened twice.”

Woolley also hung up the fastest time during time trials, with a run of 28.30 seconds on the smooth half-mile. That earned him $50, as did the first five fastest qualifiers

Curley Boyd of Indianapolis, scheduled to start the consolation, withdrew his car at the last minute when it was discovered that someone had dumped five gallons of water, not fuel, into his gas tank. 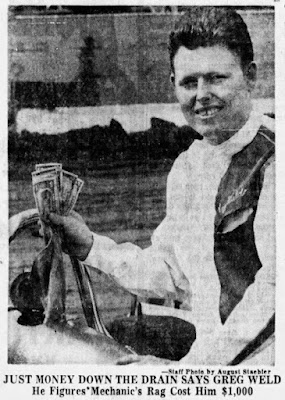 The second largest crowd ever to see the Florida State Fair races, 10,323, watched Jim McCune take the lead on the 10th lap and then extend margin from there to win the 25-lap IMCA sprint car feature on Saturday, February 6.

Despite a late caution flag, McCune was nearly a lap ahead at the finish. The 34-year-old Toledo, Ohio, driver hopped from car, flashed a tooth-missing grin at the speed queen, Cookie Benken, and asked where he could get a drink of water.

“It was hard and slick out there, just the way I like it,” said McCune, best known for his pavement driving and it was the asphalt tracks on the IMCA circuit that helped him climb to second place in the point standings late in the season.

“I just started with this car last year, he explained. It runs really good.”

Car owner Ray Smith of Eaton, Ohio, sitting in a wheelchair beside his race machine, offered his congratulations to McCune, who had an agreement with Smith to run the car all season long.

Finishing second to McCune under the checkered flag of Johnny Hicks, was Dave Lundy of Pittsburgh, hands down the hardest working driver at the track that afternoon. He came from his ninth starting position in the consolation to place second and qualify for the feature. He bullied his way from his 14th starting position in the feature on a slick track to score an impressive second-place finish. His overworked engine blew on the white flag lap, and he coasted to the finish line, a car-length ahead of opening day winner Gordon Woolley.

Woolley charged to the front of the 25-lapper from his pole position and held it until lap 7. Then, young Greg Weld of Kansas City pulled up on him on the outside while McCune was on the inside. Weld went into the lead in front of McCune and looked to be a cinch to win the race, but his motor soured a couple of laps later, and he drifted back into the pack while McCune surged to the lead and the victory.

A check of Weld’s machine indicated that lint, probably from an oil rag, had clogged the fuel line and his engine starved as a result. In the series’ opener, Weld was going great guns but an air valve in his fuel tank froze and developed a vacuum, and he couldn’t get enough fuel to his engine.

“He just guessed right on tires, and I didn’t,” Gordon Wooley summed up, after finishing second to Tampan Buzz Barton in the 30-lap feature on Sunday afternoon, February 7, watched by 7,800 fans. It was the third feature race in the Winternational Sprints series.

It was an endurance race for the 48-year-old Barton, whose face was almost as red as his shirt, as he crawled out of his race car. “Man, I am done,” was his comment, although he had enough strength to collect his trophy and a kiss from Cookie Benken.

The half-mile Plant Field, despite a great job by the ground crew, was muddy and heavy as the day’s action begun but was as hard as concrete when the green flag for the main event waved. Barton’s Offenhauser, owned by Roy Thomas, wasn’t supposed to be in contention. The stock-block Chevies, so the experts reasoned, were better suited for the asphalt like racing surface.

But few had reasoned with Barton, who took his crusty old four-banger from the inside second row to first place in only three laps and then logged what he called, “three hours of driving time,” to the checkered flag.

Barton sailed high past Woolley off the fourth turn – the same place the two had tangled in the season opener – on the second lap but lost his momentary lead between turns one and two. High again in turns three and four, where “I knew I’d have to get up in the loose stuff to pass him,” and Barton was by him for good.

A complete chassis change by Thomas and his crew, plus some different tires, plus Barton’s knowledge of the tricky oval paid off handsomely at the payoff window.

“Everything worked out great, Barton said, downing a cool drink. “We were going to change everything before the trophy dash, but they cut that out and added five more laps to the feature”

The extra five laps added a frown to Barton’s round face. “Man, I’m out of shape. I haven’t been in one of these critters for several months.”

The rotund chauffeur kept Cookie Benken, the speed queen waiting in the winner’s circle, holding the trophy as he peeled several layers off his googles. Not many were needed because Barton was up front most of the race.

“Like a woman getting out of a girdle, isn’t it?” he asked the queen, bringing a big laugh from the crowd surrounding the winner’s circle.

Jim Moughan, an interior decorator when not in a helmet, drove a tremendous race to grab third-place money and was within hailing distance of Woolley in the later stages of the feature. 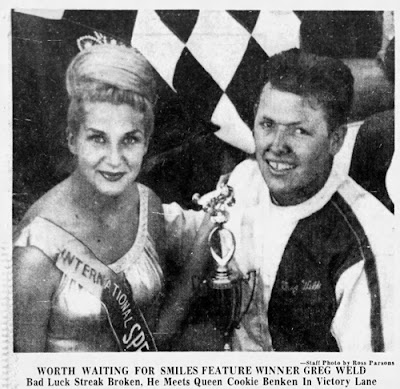 Greg Weld, dogged by bad luck in the first three programs of the Winternational Sprints, made himself and the 5,803 race fans happy by winning the 30-lap feature on Wednesday afternoon, February 10.

The crowd sweated out the Weld win and also the 87-degree heat under a cloudless sky. The boiling sun made the track hard and slick and the competition as hot as the weather.

Weld’s good fortune was Gordon Woolley’s misfortune, as the latter spun out of the lead on the 21st circuit and after being relegated to the rear of the field, pulled out of the race. The Waco, Tex., driver figured the odds were too long.

Weld and Woolley were the only two drivers to hold the lead, although Weld and Jim McCune of Toledo, Ohio, swapped second place a couple of times in a tight battle for position.

Surrounded by happy fans in victory lane after crawling from his blue and white #92 sprinter, the 22-year-old was graceful in receiving congratulations and remarked, “They can’t be any happier than I am. I’ve had a rough couple of outings and this victory was much needed.”

Weld said he had a birds-eye view of Woolley’s spin in front of McCune in the fourth turn. “It looked to me that Woolley got out of the groove heading for the homestretch and McCune went under him. Woolley tried to steer back into the groove and the two met and it was all over.”

Woolley spun and McCune tried to brake, with the two cars ending up nose to nose. Weld managed to brake hard and get around the outside of the stalled cars and take the lead for the first time.

McCune finished second and Larry Dickson of Marietta, Ohio, who started 14th, maneuvered his way through the field to take third. Buzz Barton was fourth and Bill Brown finished fifth. 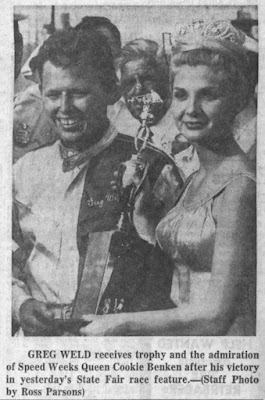 Weld would run off and hide in the Winternational Sprints finale, winning the Golden Anniversary “50” sprint car race at Plant Field on Sunday afternoon, February 13. While Weld collected two trophies for both of his feature wins, Jim McCune of Toledo, Ohio, won the Florida State Championship, based on points accumulated in the five-race series, including his second-place finish during the finale.

McCune accepted his trophies and remarked, “I competed here last year but I was running so far back, that nobody knew I was here.”

Weld took the lead on lap 23 when race leader Gordon Woolley mistakenly charged into the first of the slower lap cars. As Weld passed, Woolley’s car broke the drive shaft, and the lanky Texan was out of the race. Weld’s winning time for the 50 laps was 22 minutes and 43.11 seconds.

“I was just sleeping in the turns,” he said afterwards. I have to watch myself sometimes when I get way out in front.”