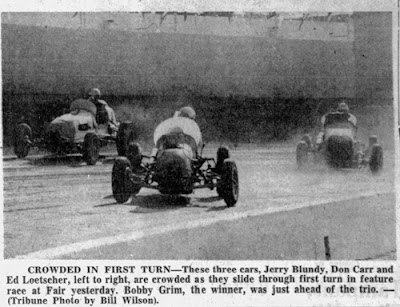 Tampa, Fla. – Don Carr, the blond bombshell of auto racing, who started the 1957 IMCA big car season with a victory at the Florida State Fair, did it again to start the 1958 season, winning the 15-lap feature before 4,500 in the Winternational Sprints opener on February 5.

Carr wheeled Pete Mocca’s Circle Deuce Offenhauser to a wide victory in the main event, after winning his heat race and finishing second in the match race. He blew the field off the track, lapping all but four cars in the 18-car field.

The Jackson, Mich., driver showed he knew his way around the half-mile clay oval from last year, when he won two features and took second in the other two to dominate the series.

Carr and Loetscher started on the front row at the start and the whole field climbed on their backs as they entered turn one. Carr came out in front on the back straightaway and was never out of the lead. Grim wheeled to the outside to grab the second spot and he hung behind Carr for the rest of the race. Grim rode close to Car for the first three laps but lost ground by the fourth lap and was out of contention for the remainder of the 15-lapper.

As Carr took Johnny Hicks’ checkered flag, he had a straightaway lead over Grim, and Grim had a quarter of a lap lead over Loetscher. The event was clocked in 7 minutes and 17.94 seconds.
Repeating his performance of the series’ opener, Don Carr would jockey his blue and gold #2 Mocca Offy to victory again in the 20-lapper on February 8 before a crowd that exceeded any to see a race at the Florida State Fair, as some 9,000 spectators pushed through the turnstiles to see the second leg of the Winternational Sprints.

The Michigan speedster looked as though he owned a piece of the half-mile clay oval as he opened up a wide margin at the start of the main event and increased it every lap to the finish. Finishing second again was Bobby Grim, who held a big margin over third-place finisher Eddie Loetscher. All three were wheeling powerful Offenhauser's.

Those three leaders were followed by Jim Hurtubise of Inglewood, Calif., and Jerry Blundy of Galesburg, Ill. The time of the race was 9 minutes and 36.30 seconds.

Heat races were won by Buzz Barton of Tampa, Jim Packard of Indianapolis, and Jerry Kemp of St. Louis, Mo. Grim won the match race and Carr scored the victory in the consolation.

The day started badly for Carr as he dropped out of the first heat with mechanical issues and was knocked out of the third heat when he Leon Hubble of Linton, Ind., tangled wheels in the north turn. Carr smacked the inside wall and blew a tire. After some repairs, he drove hard in the consolation, and with his car handling right, won the 10-lapper to qualify for the starting field. 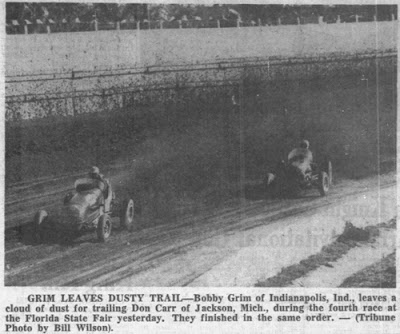 Bobby Grim would collect his first IMCA victory of the season and the St. Valentine’s Sweepstakes Cup from his beautiful wife Betty, winning a wild 20-lap feature on February 14.

It was probably one of the slimmest crowds to see the big cars on the Florida State Fair half-mile, as fans sat in scattered groups in the grandstand, but the little over 2,000 that did turn out in defiance of cold weather, saw some of the best racing action of the three days of racing.

Grim was at his rim-riding best in the afternoon matinee, finishing half the length of the grandstand straightaway in front of Johnny Pouelson of Gardena, Calif. Jim Hurtubise, piloting a Chevrolet, finished third behind the two Offenhauser drivers.

Heat races were won by Bob Tattersall, Buzz Barton, and Jim Packard. Jerry Blundy won the match race and Eddie Loetscher was first in the consolation.

Grim actually trailed Don Carr at the end of the first lap but he tucked the Black Deuce between the wall and Carr’s racer on the south turn and took over the lead on the second lap. From that point on, he was unbeatable. He widened his margin on lap 3 and then skirted the outside wall, lap after lap, for the remainder of the contest.

Carr remained in second place until lap 15, then gave way to the charging Pouelson. On lap 19, Hurtubise pulled alongside Carr and slipped inside of him on the north turn to take third place away from as well. For Hurtubise, it was an impressive drive, who had started ninth. 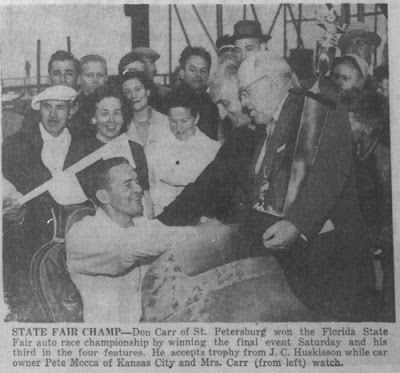 A furious Don Carr would win the Winternational Sprints finale on Sunday, February 15, that had the crowd of 4,500 shivering from the excitement rather than the cold temperatures. The big car contest turned into a personal tussle in the late laps for Carr and Buzz Barton as the two Offenhauser pilots traded paint with the walls and more importantly, each other, in the 25-lapper.

As Carr brought his car to a halt in victory lane, he charged out of the cockpit and appeared to be headed straight for Barton, but five or six men, comprising of both crewmembers and officials, intervened quickly.

The final five laps of the feature brought some of the most exciting, wheel to wheel racing ever seen on the Plant Field half-mile. Barton took the lead briefly on the 23rd lap by sweeping out of the north turn and brushing tire with Carr. Carr, who was almost swept off the track by the maneuver, floored his gas pedal and lunged after Barton, taking him on the next turn. Barton made one more charge on the 24th lap, but hit a rut, sending his car bouncing and losing ground before he could straighten himself out.

Carr pulled away and finished with a five-car-length advantage while Barton settled for second and Jim Hurtubise was third. Barton also won a heat race as did Jim Packard and Bob Tattersall.

Bobby Grim, the three-time IMCA national champion, won the 4-lap match race but dropped out of the feature after uncharacteristically spinning out twice, including spinning out on in front of 16 charging cars on the first lap of the feature.

“There I sat, going backwards, with all of those guys coming right at me,” he said afterwards. Luckily, he came out it, although with a bent steering wheel. Because of the faulty steering, he would spin again on the ninth lap and after that, call it a day.

Based on points for the four-race meet, Don Carr was crowned the Florida State Champion of the Winternational Sprints.