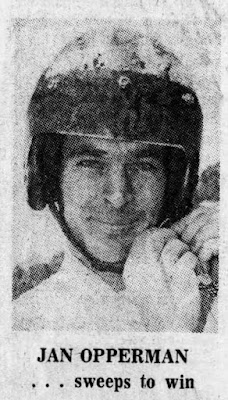 Tampa, Fla – Jan Opperman of Beaver Crossing, Neb., made a shambles of the opening night of the 53rd annual Winternational Sprints by setting fast time, winning the trophy dash, his heat, and the 30-lap feature. Thad Dosher of Topeka, Kan., was second and Kenny Weld of York, Penn., took third.

A crowd of 5,500, the largest opening night crowd in Florida State Fair racing history, enjoyed a beautiful night of racing.

Opperman, Weld and Larry Miller of Bedford, Ind., won heat races. Opperman won the trophy dash and Harry Benjamin of Wysock, Penn., won the 10-lap consolation. Opperman’s qualifying time for the half-mile was 26 seconds flat. He was clocked on the front stretch by Joe Bell, an Iowa deputy sheriff, at 89.88 miles per hour.

The second day of the Winternational Sprints, February 10, was also a one-man show with Kenny Weld in the starring role. Weld won the 30-lap feature, 8-lap heat, and set a new record in winning the 6-lap trophy dash. 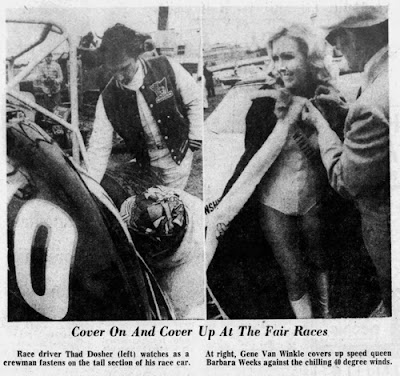 The weather was as cold as Weld was hot and the 5,200 brave fans in the grandstands were treated to the sight of snow falling during hot laps.

Bobby Adamson, also of York, Penn., finished second behind Weld with Earl Wagner of Pleasantville, Iowa, third. Opperman, Weld, and Roger Rager of Mound, Minn., were heat winners. Weld won the trophy dash and Darryl Dawley of Sioux Falls, S.D., was the winner of the consolation.

Jan Opperman, the opening night winner, set fast time and won his heat but got into the fence during feature time and damaged his car beyond repair.

After his crew replaced front tie and radius rods in his Bogar Chevy #99, Opperman would storm back on February 11, taking the immediate lead from his outside front row starting position and sailing to the easy victory in the 30-lapper. Wib Spaulding of Granite City, Ill., was second followed by Thad Dosher.

A crowd of 6,100 braved the chilly winds to watch Kenny Weld, Dick Sutcliffe of Greenwood, Mo., and Cliff Cockrum of Benton, Ill., win heat races. Opperman won the match race and Doc Dawson of Lima, Ohio, scored the victory in the consolation.

After the February 15 program, IMCA officials were considering changing the name of the Winternational Sprints to the “Jan & Kenny Show,” after Kenny Weld won his second feature of the series to match Opperman’s total of two wins.

Weld, who set quick time, started sixth because of the invert but was up front for good by lap 4. He dropped a cylinder early on in the race which actually helped him. “After I dropped the cylinder, I didn’t have the power, so I wasn’t spinning my wheels and the tires stayed cool.” 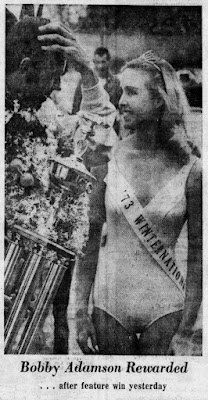 Bobby Adamson would break the “Jay & Kenny” stranglehold and win the 50-lap series finale on February 17. With his third-place finish, Kenny Weld was crowned Winternationals champion for 1973. Jan Opperman finished fourth in the feature and second in the point standings.

Adamson, driving a tough, narrow-grooved track, got by Thad Dosher with only five laps to go to register his first feature win of the ’73 series and fourth career Winternationals victory. Adamson, who competed in the Winternationals from 1968 to 1971 but snubbed by the association in ’72 because he ran no more races in ’71, said he was anxious to make a good showing to get back in good standing.