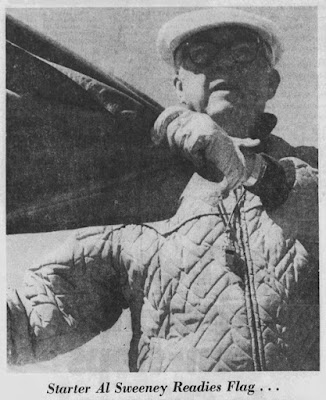 Tampa, Fla. – Bobby Adamson of York, Penn., who always did his best on the final day of the Florida State Fair races, turned the tables around on the opening day of the ’70 Winternational Sprints on February 4, winning the 25-lap season opener.

For the final two years, Adamson had won the final feature of the series, but he ran a perfect race before a half-frozen crowd of 3,300 hard core race fans shivering in the grandstands.

It was a tough one to win, with six yellow flags slowing the race, bunching the field, and taking away the cushion Adamson kept building as a lead each time.

The lanky Adamson had trouble in hiss heat race because he had the wrong tires on the car, but all of that changed with the swapping of tires for the feature.

“The track was beautiful once we got the setup correct,” he grinned. “My car felt so good I can’t even explain it.”

He got the lead on the first turn, from his pole position, at the start and was never headed, not even threatened. Each time the field was released from the yellow flag, he roared away to open his lead again. The feature race was the most interrupted of the day, and about 15 of the 25 laps were run under caution.

While Adamson was comfortably leading, a dogfight ensued for second place between Bobby Allen of Miami, Kenny Weld of Kansas City, and Jan Opperman of Beaver Crossing, Neb., with those three drivers finishing in that order.

J.D. Leas of Winterville, Penn., turned the fastest lap of the afternoon, speeding around the half-mile dirt oval in 26.71 seconds. With a wet track in the morning, time trials were moved to the afternoon and cars were put on the track at the rate of two at a time to keep the program from lagging.

Once the surface was rolled and dried, it turned into a beautiful tacky, tire-gripping racing surface. The action was furious in all of the races, with grooves on the inside, the outside, and right down the middle.

Bill Utz of Sedalia, Mo., Bob Williams of Kansas City, and Jerry Blundy of Galesburg, Ill., were heat winners Adamson came back from his poor heat race to claim the 5-lap match race and Chuck Lynch pf Springfield, Ill., was the consolation winner.
Adamson saw a second feature win slip away three nights later on February 7 in a controversial feature. In a crowd-stirring stretch run, Eddie Leavitt of Kearney, Mo., out-charged Adamson and won by the width of his front tire, and the two drivers continued down the track into the first turn, almost tangling before they could bring their cars under control.

The controversy came after the race when Adamson said a IMCA official, standing in the second turn, flashed the yellow flag at him with only two laps to go. “You saw him (Leavitt) pull away from me then,” Adamson recalled. “The yellow flag went out and I backed off the throttle. When I got down to the third turn, I saw that the green light was on.”

Adamson didn’t make an official protest of the race, shrugging it off as one of those things, “that goes with racing.”

Leavitt, who was in front of Adamson, did not see the incident and was thoroughly pleased with his victory, the kiss from race queen Diane Carol McCracken, the trophy and the fans who besieged him for his autograph.

It was Leavitt’s first career IMCA sprint car victory, even though he had won numerous modified victories throughout the Midwest.

“I was beginning to wonder if I was going to make it,” he said. “The motor started sputtering about halfway through the last lap. But it caught up on the front straightaway.”

It was Leavitt’s first trip to Tampa, but he learned the track quickly, using the cushion in the turns from which to kick off with his right rear tire.

Leavitt started on the pole after finishing fourth in the first heat race. He led from start to finish and was not threatened until midway through the race when Adamson got through traffic and up to make a challenge.

The drivers had a good track to race on, with plenty of passing to please the overflow crowd 8,250. The only serious incident was a slow roll by Darl Harrison of Tiffin, Ohio, the defending IMCA national champion. He got high up in the loose dirt and climbed the wall. 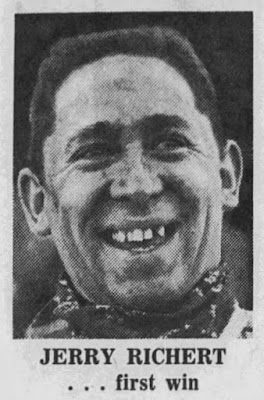 More than 8,000 fans saw sentimentality, heartbreak, and tragedy when the fourth segment of the Winternationals took place on Sunday, February 8.

It was sentimental victory for Jerry Richert of Forest Lake, Minn., the former four-time IMCA national champion, who was sidelined for most of ’69 after having surgery. It was his first win since last year’s opening day of the Winternationals.

The heartbreak was seeing Don Mack break an axle after leading the event for 22 laps. The potato farmer from Minnesota was enjoying a healthy lead and was only eight laps away from victory when his rear axle broke, forcing him out of the race.

The tragedy occurred when Cliff Cockrum of Benton, Ill., had to bail out of his flaming sprinter on the front straightway during the first heat race. Cockrum sustained second third degree burns on his hands and legs. His mount, a brand-new racer was totally demolished by fire which was not extinguished until a Tampa fire department was called from outside the fairgrounds.

For the feature winner, “it was the happiest day of my life.”

Less than six months ago, Richert underwent a major operation to remove a tumor from his chest. It was a healthy Richert, however, who dominated Plant Field on Sunday afternoon, and when it was all over, a happy man on top of it all.

J.D. Leas passed four other cars during the hard-fought feature to gain second behind Richert while Jerry Blundy finished third.

Bob Kinser won the tragedy-marred first heat while Jay Woodside won the second heat. Buzz Rose of Manhattan Beach, Calif., was the third heat winner while Richert won the consolation to qualify for the feature. 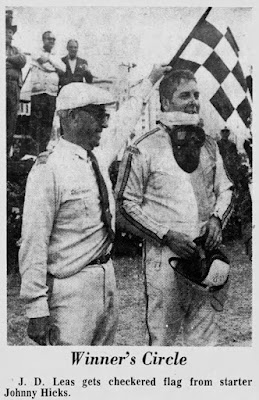 Patience would pay off for J.D. Leas on Wednesday, February 11. Making his third trip to Tampa for the Winternationals, Leas set a new track record in the 6-lap match race, then went out and won the 30-lap feature race, his first-ever at the Florida State Fair.

The drivers found a slick track during the afternoon with little cushion on to work with. Jerry Blundy set fast time with a lap 25.22 seconds, but he was the last man to use the cushion effectively, and the times started falling after that.

The track was so slick, there was one red flag and four yellow flags thrown by starter Johnny Hicks just during the consolation. Jerry Richert, Sunday’s feature winner, got into the wall and broke the front axle, putting him out of action for the day.

Leas trailed Russ Laursen of Cumberland, Wis., for the first 11 circuits as the two started on the front row. Once in front, Leas opened up a commanding lead until Bobby Adamson pulled up from his fourth place starting position and began to challenge.

The two front runners came through the fourth and final turn dead even on the last lap, but Leas got back into shape quicker to make the charge past the checkered flag first with Adamson mere feet behind him.

“My car was working real good,” Leas said from victory lane. “I’d like to do this again this Saturday (the series’ finale).” 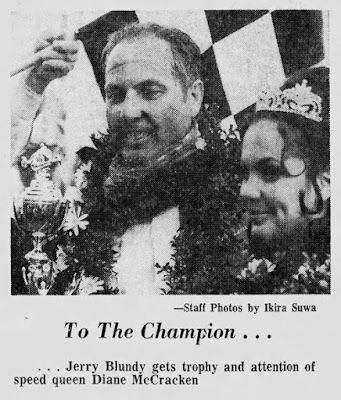 Jerry Blundy, the “Mr. Steady” of the IMCA sprint car circuit, would win the 50-lap finale on Saturday, February 14, as the Winternational Sprints came to a close.

On the 50th and final lap, Bobby Adamson closed up on Blundy and almost caught him as Johnny Hicks dropped the checkered flag. Adamson winner of the series’ opener and “Mr. Consistent” himself through the five programs, was overall points leader at the end and received his giant trophy as the Winternational Sprints champion.

Blundy a rim rider to the end, ran out of cushion on the piled clay at the top of the track, and it was almost his undoing.

“It was getting awful thin,” he said. “But I could have run faster on the inside. My tires were set up to the run the pole, but my crew kept giving me the signal that I had a big lead.”

And that he did until the final two circuits, when Adamson came out of nowhere to make his charge at the leader.

But Blundy heard Adamson coming and planted his foot down hard on the gas pedal coming down the front stretch to shake off the challenge.

Blundy was presented his trophy by visiting Andy Granatelli, and in repeat of the scene when his own driver, Mario Andretti, won the Indy 500 last May, planted a kiss on the cheek of Blundy much to the delight of the crowd.

Sunday afternoon’s crowd was 8,900, by far the largest closing crowd ever in Florida State Fair history. For the five days of racing, in spite of two cold days, attendance hit 32,070, one of the largest draws ever. 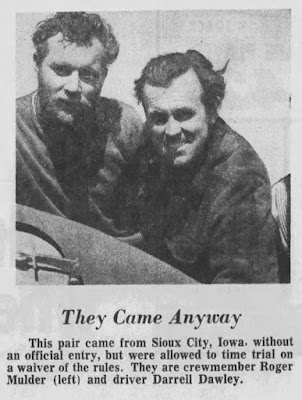