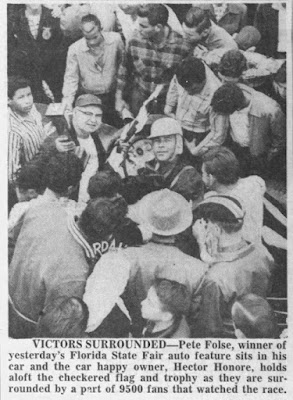 Tampa, Fla. – The opening day of the 1959 Winternational Sprints saw Pete Folse of Tampa push is Honore Offenhauser to victory in the 15-lap feature but the race was overshadowed by spectacular rolling crash in the first heat that critically injured Eddie Loetscher of St. Louis, Mo., and also injured Mickey McCormick of Hutchinson, Kan.

Loetscher’s Offenhauser skidded into the wall and rolled three times. Loetscher was rushed to a local hospital where he underwent an operation for a spleen injury and was placed on the critical list. He also suffered s broke arm and fractured ribs. McCormick suffered a broken nose and abrasions.

Riding smoothly in spite of a hole-filled and slippery racing surface, Folse drew the applause of the 4,500 in attendance by coming from last to first in the second heat.

In the feature, Folse drew the pole position after McCormick, the fastest timer in qualifying with a time of 25.25 seconds, couldn’t start because of his accident. He led the field through the first turn and came out with the lead, with fellow Tampan Buzz Barton riding on his heels.

The duo rode close for the first five circuits, but Folse eventually found the best combination between the grooves and the holes and pulled away. He built up a straightaway lead and kept it to the checkers.

Barton and Don Carr of St. Petersburg staged a battle for the last five laps and Carr managed to get by Barton as they entered slower traffic. Barton finished third with Red Amick of Muncie, Ind., in fourth and Johnny Roberts of Wheeler, Mich., rounding out the top-five.

A record crowd of 9,500 would see Folse guide the Black Deuce to its second straight feature victory on Saturday, February 7. In addition to winning the 20-lap main event, the peppery little Frenchman would win the first heat and finish second to Buzz Barton in the match race.

Folse, starting on the pole of the, grabbed the lead in the first turn and pulled away from the rest of the field early on. He would have to surrender his advantage when Don Car spun on the eighth lap. On the restart, with the cars radiator to tail in single file, Folse again eased away and increased his margin almost every one of the remaining 11 laps around the half-mile clay oval.

Barton would finish second, just ahead of a Jim Hurtubise, the young up and comer from Gardena, Calif. All three drivers piloted Offenhausers.

Carr would turn in some of the most spectacular laps following his spinout. He restarted at the rear of the field and started his climb back to the front where he would end up passing both Red Amick of Muncie, Ind., and Colby Scroggins of Pasadena, Calif., in the remaining two circuits to finish an impressive fourth.

Bud Randall of Mitchell, Ind., won the second heat and Lee Drollinger of Champaign, Ill., was the third heat winner. Hurtubise would fend off a stubborn Bob Mathouser of Wayne, Ind, to win the consolation.

Johnny Poulsen of Gardena, Calif., would push his Perdue Offenhauser to victory in the 20-lap feature on Wednesday, February 11, riding a hard and slick surface to a new track record.

Poulsen, pressed most of the way by Buzz Barton, led the field from the start and was clocked in 9 minutes and 12.13 seconds to erase the former mark of 9 minutes and 20.24 seconds set by Bobby Grim in 1955.

The crowd of 4,700, the largest ever to see a mid-week card at Plant Field, saw plenty of action as Poulsen and Barton found the right combination at the start and ran away from the rest of the field. Poulsen would be about five car lengths in front of Barton when he received starter Johnny Hicks’ checkered flag. Finishing behind them were Jim Hurtubise, Al “Cotton” Famer of Dallas, Tex., and Red Amick.

Pete Folse, who won the first two features of the Winternational Sprints, mounted a challenge at the start of the main event but later would experience brake failure, and fall back to finish sixth.

Bob “Two-Gun” Tattersall won the first heat, Poulsen took the second, and Colby Scroggins was tops in the third heat. Hurtubise won the match race and Amick ran away with the consolation.

Poulsen had a gaggle of cars hot on his tail for the first eight laps, but he gradually pulled away to a safe margin and was only threatened in the final three laps by Barton. Barton would come up to challenge Poulsen only after Folse’s brakes forced him to slow through the corners, but as the pair encountered slower traffic, Poulsen threw off Barton’s challenge and finished with a comfortable margin.

Poulsen would follow up that victory with another on Saturday, winning the 25-lap finale of the Winternational Sprints on Saturday, February 14. Pete Folse would claim the Florida State Championship despite a protest over one of the numerous restarts in the feature. Poulsen was clearly the master in the field, although Folse tried to get by him on the inside, outside and almost straight over him to get in front of him.

The crowd of 5,500 waited patiently as the feature was restarted four times because of spinouts on the track. One spinout took out Al Farmer and set him to a local hospital with back injuries. Farmer hit the wall hard in the north turn after tangling wheels with Leroy Neumayer of Compton, Calif. Both cars were damaged and unable to continue.

There was a dispute over second place because Folse changed a tire during one of the red flags to clear the track. Diz Wilson, owner of Buzz Barton’s Offy, protested the finish based on the fact that Folse had made the change when the race was stopped on lap 17.

Referee Al Sweeney checked with IMCA secretary John Libby by phone in St. Paul, Minn., and the rule stated: “When a race is stopped on a red flag, no repairs of any kind are allowed.” So, the protest was allowed, and Barton was credited with second place while Folse was dropped back to third.

Folse, however, won the Florida State Championship on points. He had 420 at the end of the four-day meet while Barton finished with 400.

Folse experienced handling issues all afternoon long and was constantly changing tires to find a suitable combination for the hard, slick track. He was still changing in the midst of the feature and that got him in trouble with the rule book.

Poulsen drove a like a midget pilot, staying tight on the turns and giving Folse absolutely no room to stick a wheel in on the inside. Most of the attempts Folse made to get around Poulsen were on the outside but because of the tire issues, couldn’t muster enough momentum to carry him off the corners.