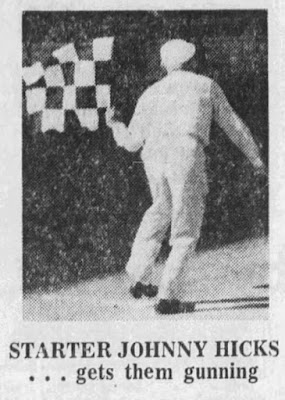 Tampa, Fla. – Jerry Richert of Forest Lake, Minn., who first withdrew his car from the opening day of the Winternational Sprints, cooled his temper later, re-entered the races, and ran away with the 30-lap feature before 3,800 fans on February 5.

Richert almost missed the show in a dispute over what type of tire he was using on the rear wheels of his sprinter. When he was told by International Motor Contest Association officials that his tire was illegal, he announced he was withdrawing from competition. Later, he changed to a different tire which officials allowed and he re-entered.

Luckily, he did, because it became “Jerry Richert Day” at the annual Florida State Fair races. He managed to capture the second fastest time in qualifying, placed second in the 5-lap trophy dash, won his heat, and then copped top honors in the main event.

Finishing second behind Richert in the feature was Ray Tilley of Clearfield, Penn., and third was Darl Harrison of Tiffin, Ohio.

Dick Gaines of Mitchell, Ind., was the first heat winner, Richert took the second heat and Harrison scored a victory in the third heat. Jerry Blundy of Galesburg, Ill., won the STP trophy dash and Gordon Woolley of Waco, Tex., won the consolation.

All of the events were run on a slippery track and almost all of the races were interrupted at least once to straighten out a spinout machine, but some of the drivers found the outside rim had enough piled clay to give them a cushion to kick off the turns.

Richert, starting in the fifth position in the reversed start, wasted little time in claiming the lead. He was fourth after one lap, third after two laps, second after four laps and rode high in the south turn to go out in front on the sixth circuit. After that, he put it in cruise control while the dogfights ensued behind him.

The “hard-luck” driver of the day was Don Mack of East Grand Forks, Minn., who battled his way from his 12th starting position to place third and was climbing into second place when his machine died.

“I blew a couple of spark plugs right out of the engine,” Mack said afterwards. “The engine’s gone now. It’s the second one this week. I blew the other won at Macon (Ga.).” 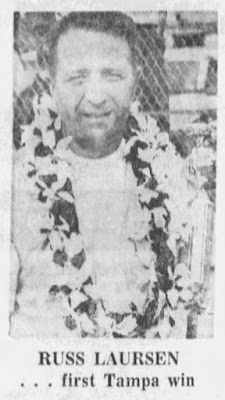 Russ Laursen of Cumberland, Wis., who “Never had any luck here,” won the 30-lap feature on Saturday, February 8. The 9,230 in attendance saw plenty of action on a good, tacky track but all of it was behind the polesitter Laursen.

Laursen was never in trouble in the 15-mile main event, running away at the start and hiding from the field, maintaining a quarter lap lead throughout the contest. He finished the race in 13 minutes and 54.15 seconds,

“I’ve been here twice before and never had any luck. I have my own car now and it’s a much better machine. It’s Red Amick’s old car he drove on the USAC trail.”

Some real hard charging was done by Darl Harrison and Don Mack. Harrison started in the 15th position and finished fourth and Mack, who blew an engine in the opener, started 10th, and rounded out the top-five finishers.

Heat wins were scored by Ralph Parkinson of Wichita Falls, Tex., Chuck Lynch of Springfield, Ill., and Don Nordhorn of Wadesville, Ind. Gordon Woolley won the match race and Jerry Blundy was tops in the consolation.

Darl Harrison would win one of the closest features in recent Winternational Sprints history when he scored the 30-lap victory on Sunday, February 9, before 7,590 chilled fans.

Harrison had learned enough about the narrow-grooved half-mile dirt track to out-fox the fox himself, Jerry Richert. At the finish, Richert finished third, after being passed on the four laps from the end of the race by Don Mack.

A battle developed between Harrison and Richert about midway through the main event and the two traded the lead multiple times with Harrison leading down the front chute and Richert taking charge on the backstretch.

On the 24th circuit, Harrison slipped under Richert on the inside of the south turn and came out too far ahead in the second turn for the Minnesota speedster to catch him. From that point on, Harrison pulled away and left the battle to Richert and the oncoming Mack. Mack got by Richert on lap 26 to take second. It was a magnificent run by Mack, who had started 12th.

Harrison found the track exactly to his liking, damp, loose and with a good cushion of clay at the rim.

“It looked best up there,” he said of his ride. “But it was pretty rough. I worried about the car holding together.”

Mack, Ron Perkins of Bethalto, Ill., and Dick Gaines were heat winners. Bob Kinser of Bloomington, Ind., won the match race and Richert was victorious in the consolation. 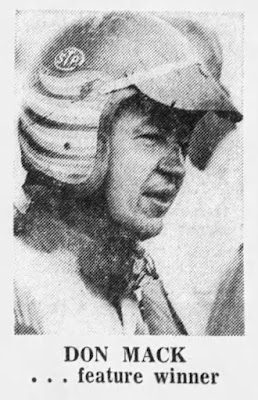 Don Mack would nearly clean house when the fourth leg of the Winternational Sprints took place on Wednesday, February 12. He not only won the 30-lap feature but also scored a victory in the consolation and placed second in the match race for the six fastest cars. It took a bit of doing in all three events.

Mack, who twice charged from back in 12th and 13th starting positions to place second, had to opportunity to start near the front of the field, with the fourth fastest qualifying run in time trials.

Mack would get a little bent up during a tangle with Russ Laursen in the second heat, bending his nerf bar. Problem was, he didn’t know it and ruined two tires before he discovered the problem.

“I was down to my last tire,” Mack said, grinning to well-wishers surrounding him In victory lane.

Mack said he had issues getting bite on the cushion like he had in time trials and was forced to go low on the track. But he was holding well in the turns and came up to pass up early race leader Dick Gaines on lap 8. He built up a good lead, only to have it wiped out when Ray Tilley spun, bringing out the yellow flag.

On the restart, however, Mack lit out again and was safely in front for the rest of the race. Darl Harrison, Sunday’s winner, would finish second followed by Bobby Adamson. The 30 laps were clocked in 19 minutes and 17.36 seconds because of three caution flags.

In the Florida State Championship race, a little bit of a dogfight ensued between Jimmy Riddle and Bill Roynon, both of Tampa. Roynon, driving on the outside groove, tried to pinch Riddle, who was diving under him, and Riddle drove up and over Roynon’s left front tire and into the lead. Roynon was slowed and Wayne Reutimann of Zephyrhills slipped by to take second while Roynon settled for third. 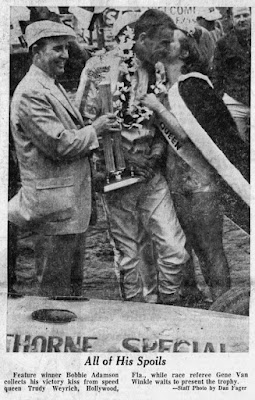 Bobby Adamson’s gamble that a heavy, wet track would become slick before 50 laps were over, paid off in a victory in the finale of the Winternational Sprints on Sunday, February 16.

The Coraopolis, Penn., pilot drove up through the pack from his seventh starting position and took over when the lead car spun out and went on to finish ahead of Don Mack and Jerry Richert.

The Florida State Fair held a special charm for Adamson, who had won five IMCA-sanctioned races in his career, with three of them at Tampa. He copped two feature wins at last year’s event but saved his best win for Sunday to take home the $1,000 first prize.

“It was rough out there,” Adamson said, standing next to his steaming sprint car in the middle of the front straightaway. “Everyone who finished earned what they got.”

He explained that his crew geared his car to run good at the end of the race. “We figured it would get slick at the end, so we went with a higher gear.”

It was a tough day for Bill Utz, who started on the pole and took the lead on the first lap. He rode in front for 25 circuits until he spun in the north turn and dropped from the race. Adamson inherited the lead on the restart and pulled away from the field, winning by several car lengths.

Ted Wise of Burgettstown, Penn., won the first heat while Jay Woodside claimed the second heat. Hank Smith of Mt. Ayr, Iowa, had some luck, getting a position in the third heat when Jerry Richert failed to have his car ready and going on to win in front of Al Murie of Kansas City. Bob Kinser won the consolation race over Richert.

Darl Harrison claimed the points title for the five-race Winternational Sprints for 1969.