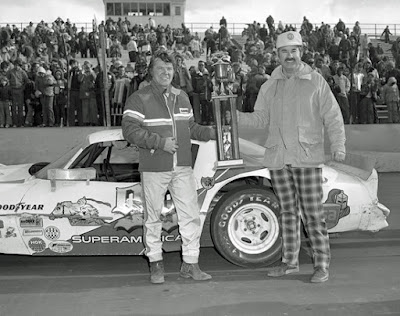 Morris, Ill. (April 30, 1978) – Dick Trickle overcame a mishap early in Sunday afternoon’s 100-lap ARTGO Spring Classic feature at the Grundy County Speedway to win the event in a photo finish over Denny Nyari and Larry Detjens. The victory, which was worth $1,855 to Trickle, was his ninth feature win of the young season, with triumphs in seven different states.

It was also Trickle’s third victory of the weekend, coming on the heels of a Friday win at Capital Super Speedway (Oregon, Wis.) and a Saturday night win in Elko, Minn.

Sunday’s race might more appropriately been called the Artic Classic, since unseasonably cold weather saw temperatures stay in the 40’s while a crisp North wind added to the chill factor throughout the afternoon.

Polesitter Steve Burgess paced the 22-car field through the first seven laps of the event,

A lot of action took place on lap 8. Bob Senneker took the lead from Burgess while Trickle, who was running several positions back in the pack, slid against the second turn wall and dropped an additional half-dozen spots.

The yellow flag came out at the conclusion of lap 8 when Bobby Dotter and Dave Evans collided with the first turn wall.

On the restart, Senneker was in command with Larry Phillips on second and Detjens in third.

Trickle pulled off a sensational three-car pass to vault into sixth place on lap 13 and continued to master the outer groove on the freshly repaved track, taking fifth from Mike Miller on the 22nd lap. Five circuits later Trickle moved ahead of Nyari to claim fourth.

Phillips bounced off the backstretch wall in heavy traffic on lap 31, allowing Detjens to gain the number two spot.

After another caution on lap 44, Detjens darted ahead of Senneker on the restart to claim the top spot and six circuits later Trickle moved into second place.

A broken lower radiator hose forced Miller to stall on the backstretch bringing out the yellow on lap 63 and on the restart Trickle grabbed the lead from Detjens.

With the track conditions slippery during the next few laps, dirt track ace Tony Izzo became one of the fastest drivers in the competition, and unlapped himself on the 78th circuit.

Another caution necessitated 11 laps from the finish, when Rusty Wallace, Burgess and Larry Nipple tangled in turn three, bunched the leaders for a dramatic sprint to the finish.

On lap 93 Nyari moved to the outside and passed Detjens for the runner-up position.

Then on the final lap Nyari swept wide pulling alongside Trickle as the pair headed for the finish. However, Nyari’s bid fell short and he had to settle for runner-up money, with Detjens finishing a close third. Tom Reffner finished fourth with Wallace in fifth.

Three-time Grundy late model driving champion Ed Hoffman set fast time with a near-record 15.65-second lap in time trials but failed to score in preliminary races. In the feature Hoffman dropped back steadily at the outset, then seemed to gain momentum midway through the contest, but was forced from action on lap 77.