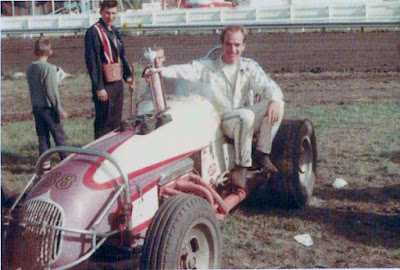 Opperman, starting on the outside in the front row, paced the 18-car field for 16 circuits before he went wide in the fourth turn and yielded two positions to Bill Utz of Sedalia, Mo., and Joe Saldana of Lincoln.

Opperman, however, would get the lead back, when Saldana and Utz tangled while battling for the lead, severely damaging the leader’s car and sending the Missourian to the pit area.

On the restart, Opperman would quickly separate himself from the rest of the field and lead the remaining three laps to seal the victory.

Dave Ross of Jetmore, Kan., and Dale Reed of Wichita, Kan., would follow Opperman across the finish line.

An earlier mishap took out Hank Smith of Mt. Ayr, Iowa, Lonnie Jensen of Lincoln, Dick Sutcliffe of Greenwood, Mo., and J.L. Cooper of Kansas City. That accident would occur on the lap 2 when Roger Lane of Blue Springs, Mo., rammed Sutcliffe from behind.

In contrast to Sunday’s opener, the track was had-slick much of the time and race times were some 10 seconds off the record-smashing pace established in the first day of racing.