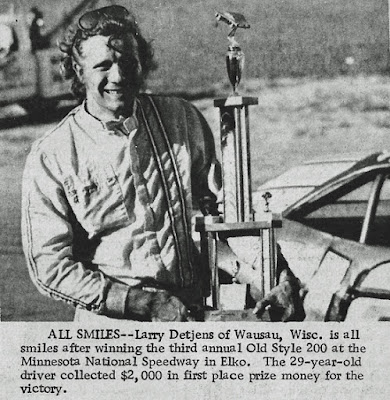 Detjens, who started ninth in the 30-car field, ran among the leaders throughout the 200-lap race before making his move on the 193rd lap, and went on to pocket the $2,000 first prize.

Smith, from Shakopee, Minn., had slowed in the final stages of the event with tire problems suffered when he was forced to brush the retaining wall while taking the lead from Jim Sauter of Necedah, Wis., on lap 168.

Smith would hang on to finish second ahead of Sauter, Bob Jusola of Mound, Minn., and Bill Oas of Bloomington, Minn.

NASCAR star Red Farmer of Hueytown, Ala., whose original mount was sidelined on Saturday night with a blown engine, jumped into Roy Varner’s 1972 Camaro for the 200-lapper and drove from his 21st starting spot to a sixth-place finish. Tiny Lund of Cross, S.C., the other NASCAR champion entered, left the race on lap 11 when the engine let go as he challenged Sauter for the top spot.

Jon Chrest of Hamels, Minn., suffered the most disappoint blow of the afternoon on lap 110 when he and Sauter bumped while battling for the lead, and he spun out, losing a lap to the field. The hard-charging Camaro driver came back, however, to pass everyone and un-lap himself. He would settle for eighth place as the seven other drivers completed the 200 laps.

Saturday night’s event, which included qualifying events for the 200, got off to a flying start when Jusola toured the 3/8-mile paved oval in record time in his 1973 Camaro. The veteran driver, who had earlier established new track records on the half-mile at the Minnesota State Fair, was clocked in 15.51 seconds, eclipsing the old mark of 15.57 seconds which he had set in July.

Almost $18,000 in prize money, awards and merchandise were distributed during the weekend, making it the richest of the three Old Style 200’s thus far.