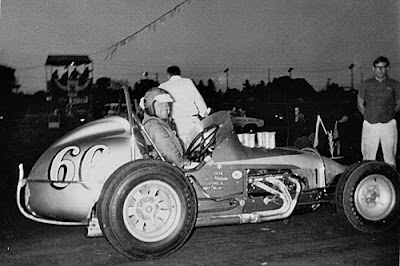 Hutchinson, Kan. (September 16, 1968) - Like old stage hands determined that the show must go on, 24 sprint car drivers turned up at the Kansas State Fairgrounds oval Monday afternoon despite rain, mud and cold.

The time trials, scheduled to start at 2 p.m., were held up for an hour while workmen tried to pack down the muddy track. The races, sponsored by the Big Car Racing Association of Colorado, were mud-strewn from start to finish, but the sparse crowd, filling about one-third of the grandstand, seemed pleased.

In a race stopped twice by spin-outs at the turns, Ralph Parkinson took the checkered flag in the main event. Starting in the first row, Parkinson, Wichita Falls, Tex., took the lead at the first turn and never lost it. He was followed by Harold Leep of Wichita and Gordon Woolley of Waco, Tex.

The semi-main title went to Roy Bryant of Wichita, followed by Roger Lane of Blue Springs, Mo. and Dick Sutcliffe of Kansas City, Mo. Gary Tuten of Denver was the only other racer who finished the semi. Bryant is three-time national jalopy champion.

The mud took its toll right from the start. Most of the cars had only minor collisions but spin outs aplenty on the turns thwarted hopes of several drivers. Although usually allowed two runs in time trials in case of spin outs, etc., the drivers Monday were limited to one chance, A spinout meant elimination from the main event where the big purse is found.

In addition to winning the main event, Parkinson also took first in the third heat over eight laps. The holder of the fastest time in the trials, Dale Reed of Wichita, placed second and Woolley placed third. Lonnie Jensen of Lincoln, Neb., claimed the checkered flag in the second heat, followed by two others from Lincoln — Joe Saldana and Chuck Kidwell.

Lane, who was second in the semi-main, won the first heat with Bryant second and Sutcliffe third. Leep, Reed, and Woolley finished in that order in the trophy dash. Woolley, known as the "outlaw of the half-mile track," was never satisfied with his car. His pit crew and he worked on the Bellmire Chevy out of Dallas. He finished third in every race he entered.