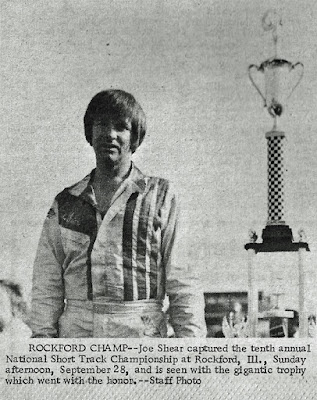 It was the third time and second in a row that the six-time Rockford champion has dominated the 200-lap event, the highlight race of the weekend of super late model stock car racing which carries a purse of over $20,000.

There were only three leaders in the race, all from the Beloit-South Beloit area. Coming from the pole position, Don Leach of Beloit, Wis., took the initial lead in hi 1973 Camaro. Leach stayed in front until lap 12 when a confrontation in turns one and two on the high-banked quarter-mile asphalt cost him his radiator.

Dave Watson, also from Beloit and who also started on the front row, took over in his ’73 Camaro and would proceed to lead the pack for the next 77 circuits.

On lap 90 Watson went high in the first set of turns and Shear went under him for the lead. He would go unchallenged for the remaining 111 laps.

Tom Reffner, the Rudolph, Wis., ace who has been winning everything in sight on the Midwestern circuit behind the wheel of his “Blue Knight” 1974 AMC Javelin, opened the weekend of racing by setting a new track record on the Rockford oval. Going into Saturday’s qualifications, the track mark was 14.17 seconds set by Shear in 1973. On his first tour of the track, Reffner topped the mark with a 14.04 second time. His second trip around was a blistering 14.002 seconds.

The winner of the two 50-lap qualification races were Tony Strupp of Slinger, Wis., and Bob Sensiba of Middleville, Mich. The checkered in the four 30-lap qualification events were taken by Dave Weltmeyer of Harvey, Ill., Bill Venturini of Chicago, Jeffrey Haar of Robbinsdale, Minn., and Jim Weber of Roseville, Minn.

Action in the third annual National Short Track Pit Stop contest was brisk and the $1,000 first place money was collected by the crew of Danny Bellard of Beloit, Wis. They performed all the required chores in 55.11 seconds.