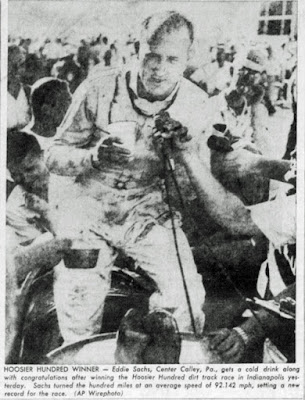 The grinning Center Valley, Penn., veteran fought his Schmidt Special around Johnny Thomson of Boyertown, Penn., in the 52nd mile and beat him to the finish line by three-quarters of a mile.

Sachs’ cuts, from glass splinters when his windshield split, were no serious. He collected $9,000 from a $32,700 purse – biggest on the USAC circuit outside the Indianapolis 500 race.

Jud Larson of Tampa, Fla., who set the old record of 91.751 miles per hour last year, hung up a one-mile qualifying record at 100.167 miles per hour, but his engine quit early in the race.

George Amick of Venice, Calif., the current USAC point leader, was also sidelined by engine problems, even before the race started.

Tony Bettenhausen, the old-timer from Tinley Park, Ill., led the first 49 miles. Thomson passed him but held the lead for only two miles before Sachs charged ahead.

Thomson had won the last three 100-milers at Springfield, Ill. Du Quoin, Ill., and Syracuse, N.Y. Sachs’ only previous victory of the season was at Langhorne.