1963 – Neighbors Put on Battle in Lincoln 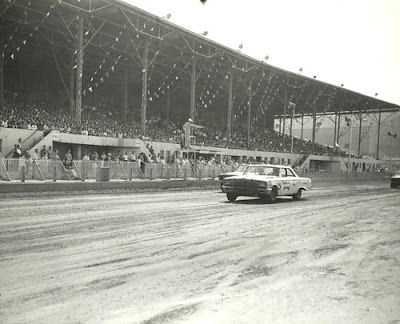 Dick Hutcherson takes the checkered ahead of Ramo Stott before a capacity crowd at Lincoln.

But they had one Wednesday. It took place during the running of the stock-car races sanctioned by the International Motor Contest Association (IMCA).

Stars in the performance work Dick Hutcherson, winner of the 50-lap feature race, and Ramo Stott who finished second.

Less than a car length separated these two Keokuk, Iowa, neighbors at the finish line. Earlier in the afternoon the identical situation prevailed in one of the 10-lap preliminaries.

And you could also list popular Ernie Derr as a co-star. He finished third in the big race, still less than a car length behind Stott.

IMCA director Al Sweeney said this was the greatest stock-car race he had seen in his 28 years of promoting.

In another 10-lap prelim it was Derr winning over Jim Washburn. The latter finished fourth in the big race

And drivers who hope to get anywhere in the world might take a tip and move to Keokuk. Because Hutcherson, Stott, Derr and Washburn are all neighbors in this small Iowa town which calls itself “The Stock Car Capital of the World”.

Hutcherson scored what could be called a grand slam of racing Wednesday. In three races, he garnered three victories and set three fairground records.

The national point leader among stock car drivers started the day with a one lap time trial record of 34.67 seconds. He then lowered the 10-lap mark from 6 minutes and 6 seconds to 5 minutes and 58 seconds. His 50-lap record time was 27 minutes which wiped out his own mark of 29 minutes and 31 seconds set in 1961.