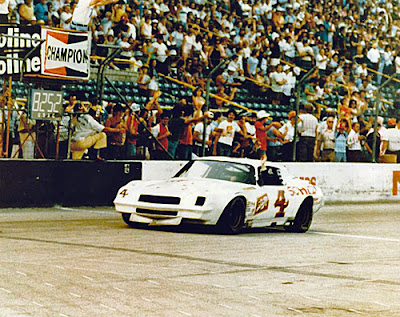 Bobby Unser takes the checkers at the Milwaukee Mile.

Unser, who hadn’t won a stock car race since 1974, was leading Dave Watson of Milton, Wis., by 13.5 seconds when a yellow flag waved seven laps from the finish of the race.

Unser, driving a 1978 Camaro, led 191 of 250 laps, battling Foyt, who also drove a 1978 Camaro, in the early stages before Foyt was forced to make a series of pit stops because of tire issues. After that, Watson, driving a 1977 Buick Skylark, challenged Unser through the middle stages of the race but could not take command.

Sal Tovella of Addison, Ill., was fourth, two laps back, in a 1977 Plymouth Volare, followed by Jim Sauter of Necedah, Wis., piloting a 1977 Dodge Aspen.

Unser said the race was especially satisfying for him because it had been so long since he’d been in the winner’s circle.

“It was a very timely victory,” Unser said. “It did me a lot of good. I’ve had a hard time winning races lately, yet I know I’m a good race driver.”