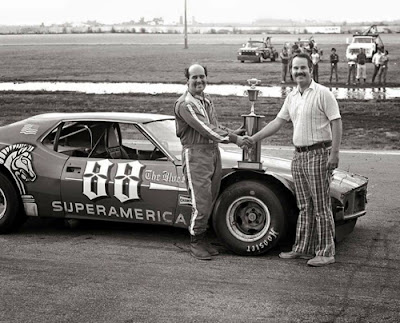 It was Reffner’s 60th win of the season.

Reffner set a new one-lap record of 16.25 seconds in time trials among the 49 late model cars which entered. Later the Rudolph, Wis., ace missed a clean sweep as he blistered a tire in the 15-lap ‘Challenge Cup’. Joe Shear won that race by passing Larry Schuler on the outside with one lap to go.

Jim O’Connor jumped into the feature lead as 25-cars took starter Frank Ropp’s green flag. Lee Schuler took second spot in the third lap and then took the lead from O’Connor in the 6th lap.

Bob Roper, the ’74 Chicagoland Champion, took over the lead on the 8th lap driving Marv Palmer’s quick #6 and opened up a comfortable margin over the runner-up.

Reffner went to the outside and passed Roper for the lead in lap 44 and was home free then for the win. Roper held on for second money while fast closing Joe Shear managed to take third from Musgrave in the closing laps.

Whitey Harris took the win in the second 20-lapper which was open to the even qualifiers not among the top-10. Red Huthison finished second.

Shear then won the ‘Challenge Cup’ over Larry Schuler and Tom Reffner.

The 12-lap consolations went to John Provenzano . . . in a controversial finish as Al Schill and Hal Davis crashed in the final lap while going for the lead.

The promotion was the first for rookie promoter Art Frigo of Lake Bluff, the President of ARTGO Racing Enterprises.