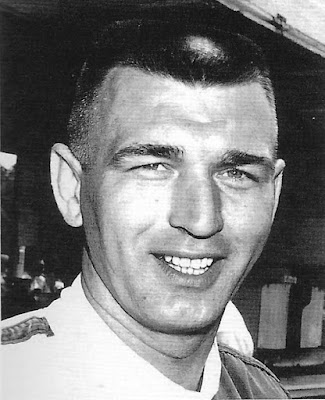 
Nashville, Tenn. (September 25, 1966) – Jerry “Scratch” Daniels led all the way and set a record for International Motor Contest Association sprint cars in winning the 30-lap feature at the Fairgrounds Speedway.

Daniels was clocked in 10 minutes and 24 seconds on the half-mile, banked asphalt, cracking the old mark of 10 minutes and 30 seconds that was set here in 1964 by Bob Pratt.

Jimmy Griggs, the local favorite who has inspirations to join the IMCA tour in 1967, also established a mark for the IMCA sprinters at a distance of 8 laps. Griggs time was 2 minutes and 44 seconds, and he was the second driver to crack the mark at that distance. In the first heat, Dick Gaines was clocked in 2 minutes and 45 seconds.

Daniels said, “My brother is ‘Itch’ and I used to be referred to as ‘Little Itch’ but it was changed to ‘Scratch’ later on.”

Only 28 years of age, Daniels would like to try Indianapolis someday. He’s the father of three children, girls, three months and three years, and a five-year-old son. They live in St. Paul, Minn.

“This was my second year to race here, but my first success,” he laughed. Asked if it was an easy race, he pushed back his hair and said, “That Charley Masters was on my bumper the whole way.”

A blanket could have covered the drivers in positions three through seven, prompting promoter Al Sweeney to remark during the race, “That’s beautiful equipment out there and those are real pros.”

Rollie Beale, Saturday night’s winner, was forced to withdraw from Sunday’s event because of oil leaking from his car.