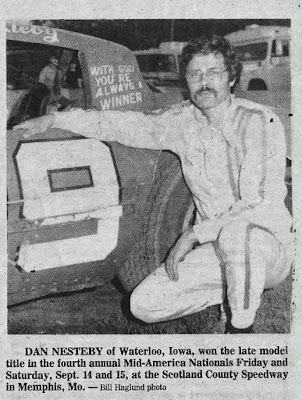 The Waterloo, Iowa, veteran driver made the tow almost 200 miles to race at Memphis and as if that was not enough, he had to survive numerous yellow flags to win the 40-lap feature.

The 40-lapper got off to a bad start when a mix-up on the backstretch caused a complete restart. The next attempt wasn’t any more successful as several cars got together in turn four, necessitating another restart.

The third time saw Jerry Pilcher of Ottumwa, Iowa, grab the lead only to drop out on the second lap due to earlier damage.

Pilcher’s bad luck was Nesteby’s good fortune as he inherited the top spot. That lead would be short-lived as Johnny Babb of Ottumwa, Iowa, would slip under Nesteby on lap 8.

Nesteby would get around Babb on lap 11 to regain control. Ron Jackson of Burlington, Iowa, who had been nibbling at the leaders’ bumper, would slide by Babb as well to take over second.

Meanwhile, Joe Churchill of Peosta, Iowa, and Bob McCall of Ottumwa, Iowa, were challenging all three contenders. They stayed that way until lap 19 when Churchill’s car went up in smoke and was forced to the pits.

On the same lap, Jackson, sensing victory, dove under Nesteby to take the lead. The two drivers battled wheel to wheel and came across the line in a dead heat on lap 24. Jackson would maintain the edge until lap 32 when Nesteby slipped under him.

Jackson would go to the outside and on lap 38, pass Nesteby in turn four, only to spin out between laps one and two.

Nesteby would roar by the disabled Jackson for the lead and hold it for two laps to score the win. Jackson would recoup to hold on to second while Johnny Babb took third. Bob McCall would grab fourth and Russ Derr of Keokuk, Iowa, rounded out the top five.

In other action, Fred Knapp of Des Moines won the sportsman title and Darrel DeFrance of Marshalltown, Iowa, was the hobby stock titlist.