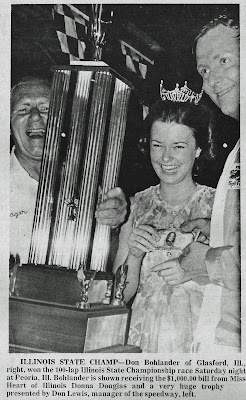 Peoria, Illinois (September 19, 1970) – Don Bohlander of Glasford, Ill., regained the Illinois State Championship again for the fourth time in six years at Peoria Speedway on Saturday night. Bohlander collected a huge trophy and a $1,000 check for his efforts.

Bohlander jumped into the lead on lap 12 and then proceeded to lap every car in the field in his ’64 Plymouth including second place finisher Bob Kelly of Wheaton, Ill., who was the defending race champion. In third place was Fred Strube, the Peoria point champion.

Alan May won the 8-lap trophy dash and was also fast qualifier in time trials. Jim Strube wheeled his ’68 Camaro to a win in the first heat. Bohlander would score the victory in the second heat. Jack Goujon, piloting a ’66 Chevelle, won the consolation while Al Terrill won the semi-main.