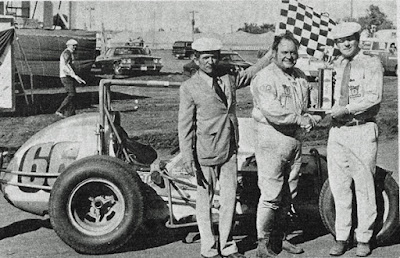 The racing activities got underway with Bill Utz of Sedalia, Mo., the defending IMCA sprint car national champion, establishing fast time in qualifying. He made the one-lap circuit with a time of 24.04 seconds around the half-mile dirt oval. Parkinson Sr. had sixth quickest time, which, with the inverted top six start, gave him the pole position for the feature event.

Parkinson would grab the lead at the wave of the green flag and never look back, leading all 30 laps in a dominating performance.

The racing action took place for second and third positions which were held by Jan Opperman of Noxon, Mont., and Utz. The two veterans raced nose to tail for almost the entire race with Opperman frustrating the champion at every turn.

Dick Forbrook of Morgan, Minn., who was running behind Utz, challenged the duo only once and settled for fourth place.