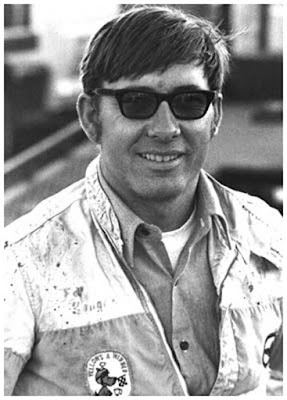 "I had a strong urge to do a lot of different things to the car (1972 Chevelle) for this race," Sanger explained after running away from the rest of the field in the 30-lap feature that climaxed the 1973 weekly season at the Downs.

I was tempted to try a bigger carburetor and bigger gear," Sanger added, "but I hadn't tried the big carburetor here before, so I decided to stay with what had gotten me this far."

That had lo be a wise move for the star pilot from Waterloo. He had gone into the final race as the season point leader and the victory clinched his third straight point championship at the Downs.

Ed's first title came on the quarter-mile dirt track and the last two have been on the half-mile.

"I'm really happy," Sanger exclaimed. "The championship here means more to me than any other another track. There’s more competition here than any place else, so there's more prestige when you can finish on top."

Sanger's final point total was 4,835. That was 290 points better than second-place Darrell Dake of Cedar Rapids, who finished second in the feature in a 1972 Nova.

Verlin Eaker, also of Cedar Rapids, drove his 1971 Nova to third place in the feature and also took third in the point derby.

Friday's feature triumph was Sanger's fourth of the campaign at the Downs, but it also marked the 34th time this year that the 32-year-old driver had claimed the checkered in a main event.

He also is the point leader at three other ovals.

Sanger, who led the entire distance, said it was his easiest win of the year at the Downs. There wasn't much doubt of that in the minds of the 3,842 in attendance.

"I didn’t really think I could get that kind of jump on Dake going into the first corner,” he explained. “But my engine really came alive tonight. It was brand new three weeks ago and it’s gotten stronger week by week.

“It was ideal tonight.”

The real battle in the feature was for fourth place and Waterloo's Bill Zwanziger held off Dike's Curt Hansen and Cedar Rapids’ Bill McDonough to claim that spot.

McDonough also won a heat and the consolation. Dave Bedard of LaPorte City and Dr. Al Mayner of Winthrop took heats, too, while Stan Stover of Reinbeck won the Australian Pursuit and Chuck Lukemyre of Tipton was the All-Star winner.