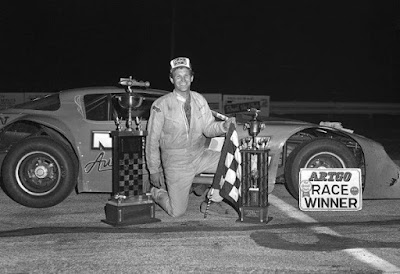 Frank Gawlinski shows off his hardware after scoring his first ARTGO-sanctioned victory in the Tony Bettenhausen 100.

The 34-year-old Lynwood, Ill., leadfoot wheeled his 1981 Camaro past race leader Tom Jones with only seven laps to go to score the win. For Gawlinski, the 1980 Illiana track champion, it was his first ARTGO feature win of his career, which began late model competition back in 1977.

Jones’ victory hopes faded on lap 94, when Gawlinski, who credited the numerous yellow flags in giving him a chance to make chassis adjustments, charged into the lead. Lap 95 saw the caution light flash again as Larry Middleton, running an impressive fourth, and Alan Kulwicki got tangled up in turn four, with Middleton spinning and Kulwicki grazing the outside guardrail.

Trailing Gawlinski at the end of the 100-laps were Tom Jones, Ed Hoffman, ’74 race winner Tom Reffner and Billy Venturini.

Jim Sauter set a new track record during time trials, turning a lap in 19.331 seconds, to set fast time for the day.