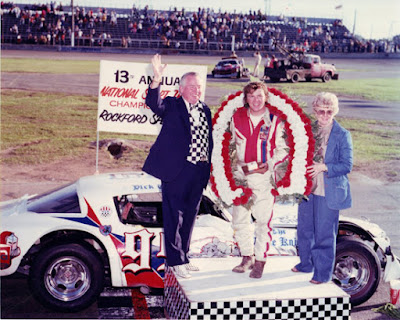 Trickle has been a contender to repeat his 1966 win every year but the victory had eluded him in about every fashion from mechanical problems to heart-stopping photo finishes.

After the race, the jubilant Trickle exclaimed, “I really earned this victory. I had to work for it. It’s not like some races that something happens and bang, you’re in the lead. This one I really had to work for.”

Ed Hoffman of Niles, Ill., took the initial lead from his outside front row position and led the field until lap 18 when a differential failure forced him to an early exit. Mike Miller, Wisconsin Rapids, Wis., inherited the top spot as the first of three yellow flags flew on lap 19. It’s here where Trickle’s struggle began.

A three-way accident sent Trickle to the pits after he brushed Mark Martin and bent the right front sheet metal into the tire. Trickle headed straight for the pit area and returned after his crew pulled the metal away just as the green flag was waving, where he fell in at the rear of the pack.

Miller led the charge until the mandatory pit stop on lap 105. The pit stop appeared to come just in time for Miller as his 1979 Cutlass was beginning to puff smoke. At the completion of the 19.5-minute stop, Miller appeared only for warmup laps and then returned his car to the pit area with a faulty water pump.

Fast qualifier and defending National Short Track Champion, Mark Martin of Batesville, Ark., who was running second at the break, took the lead at the resumption of the race. Trickle, driving a brilliant race, had worked his way up to second-place and followed Martin’s bumper until lap 129 when Trickle dived low and passed the 19-year-old driver.

From lap 130 and on it was Trickle all the way, lapping every driver in the field except second-place finisher Martin, who was six seconds behind Trickle when the checkers waved.

Ray Young of Dolton, Ill., was third, Rusty Wallace of Arnold, Mo., fourth and Don Gregory of Columbus, Ohio, fifth, all one lap down.