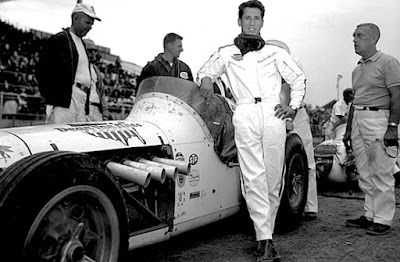 Mario Andretti eagerly awaits the start of the 1967 Hoosier Hundred.

Indianapolis, Ind. (September 9, 1967) – Defending champion Mario Andretti, who led for the last 86 laps of the Hoosier Hundred on the Indiana State Fairgrounds one-mile dirt track, defeated A.J. Foyt and nudged within 60 points of Foyt in the USAC national driving championship standings for the year.

Andretti, who handled the dirt like the White Knight, finished the race with an average sped of 95.546 miles per hour before a record crowd of 26,733 spectators.

Andretti, who now has 2,380 racing championship points, compared with Foyt’s 2,440, was nearly 10 seconds ahead of Foyt at the finish line.

They were followed to the checkers by Al Unser, rookie Bill Vukovich Jr., Jim McElreath and rookie Bruce Walkup.

Vuky, the son of a racing great, and Walkup both made big splashes as rookies in this, the richest of all dirt events.

Vukovich made a big move in the last 20 laps, and finished fourth by taking both McElreath and Walkup, who had startled the veteran stars by winning the pole with a record qualifying lap of 104.076 miles per hour.

Foyt, winner of this year’s Indianapolis 500, then gave chase to the rookie from Downey, Calif., finally slipping past on the fourth turn of the 35th lap.

Andretti had opened a big lead by the mid-point of thee race with Foyt still trying to shake loose from Walkup and McElreath dueling with Al Unser for fourth-place.

By the end of the 100 laps, however, Unser had shaken loose and Vukovich had come from the back of the pack to take both McElreath and Walkup.

The total purse for the 15th annual running of the Hoosier Hundred was a record $61,400. The bulk of which, of course, will go in the pocket of the “Lil Italian” from Nazareth, Penn., who has won five other championship class events this year.