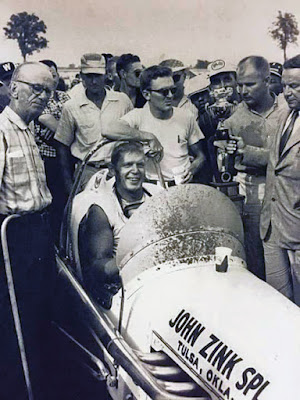 Jud Larson is surrounded by well-wishers after winning the Du Quoin 100-miler.

Most of the more than 15,000 spectators who saw the Ted Horn Memorial big car race from the grandstand, streamed on onto the track at the finish. The fans kept the track gates jammed for more than 20 minutes.

The biggest race crowd ever noted at Du Quoin overflowed into the new bleacher stands put up this past summer while an additional 2,000 saw the race from a standing position alongside the track fence.

Larson’s time for the unexciting 100-mile grind was just one and half seconds short of the 66-minute mark.

Johnny Thomson of Boyertown, Penn., would finish second while Rodger Ward of Indianapolis finished third after leading the first 53 lap of the contest.

Grinning through a coating of mud, with his face scratched from dust, Larson accepted his trophy from A.H. Hulman, president of the Indianapolis Motor Speedway.