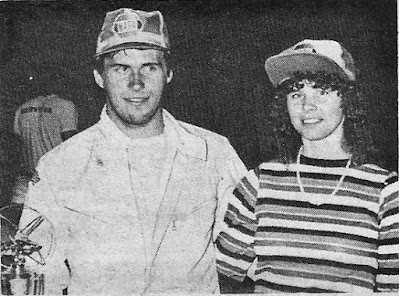 Owatonna, Minn. (July 13, 1982) – Steve Kosiski of Omaha, Neb., took the lead on the 29th lap and went on to win the third annual Gopher 50 late model race, held this year at the Steele County Fairgrounds.

This year’s event attracted 63 cars from the central states area and officials of the Blooming Prairie Jaycees, the event promoter, said an estimated 5,500 spectators attended.

Dwaine Hanson of Lakefield took the lead from his outside front row starting position and held the top spot for the first 28 circuits before Kosiski powered past for the lead. Kosiski maintained the top spot the rest of the way, while Hanson held on for runner-up honors.

Tom Steuding of Eau Claire, Wis., was third, followed by Steve Egersdorf of St. Paul and Craig Lange of Slayton.

Rounding out the top-10 were Lance Matthees of Winona, Kevin Geer of New London, Pete Parker of Kaukauna, Wis., Ron Jackson of Burlington, Iowa, and Bruce Busho of Owatonna.

Jackson made the outstanding drive of the night as he started dead last in the 30-car field and worked his way up to ninth on the rough racing surface that took its toll on man and machinery throughout the evening.

Two other drivers who started in the rear of the field because of poor finishes in their respective heats, Leon Plank of Mondovi, Wis., and Dave Bjorge of Austin, moved to the outside groove and began charging to the front. However, their drives, which had the standing room only crowd on its feet, was short-lived as Bjorge fell out when he lost a drive belt and Plank was forced to retire when he lost a radiator hose – both within the first 15 laps.