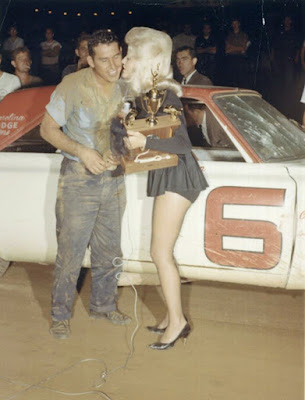 Pearson, a former NASCAR rookie of the year, who hails from Spartanburg, S.C., tooled a 1964 Dodge fielded by owner Cotton Owens.

He took the lead on the 121st lap, made one pit stop – that a quick trip in for fuel – and won out by little less than half a lap over Dick Petty, NASCAR’s leading money winner and point leader from Randleman, N.C.

Pearson, ranked fourth in the Grand National standings this season, averaged 82.65 miles per hour. He was clocked at 1 hour, 12 minutes and 40 seconds for the 100-mile journey around Lincoln’s half-mile clay oval.

The fastest qualifier with an average speed of 86.1 miles per hour in the time trials, Pearson settled into the second spot until lap 121, then made his move to the top spot in determined fashion.

Bob Welborn of Asheville, N.C., who joined Pearson in the front row, with the second fastest qualifying speed of 85.7 miles per hour, was the victim of Pearson’s daring.

For the best part of the first 120 circuits, Welborn kept his 1964 Ford in the lead. Pearson had made a threatening gesture on lap 105 but dropped back on the run by the grandstand.

Then, on the 121st time around, Pearson stuck his nose in front of Welborn coming off the second turn, battled side-by-side down the backstretch and shot in front by the fourth turn.

Welborn lost control momentarily as he attempted to regain the lead and slipped all the way back to third as Petty, who had been within striking distance since the start, took over the runner-up spot.

Pearson gradually increased his margin over Petty before going in for fuel with 32 laps to go. His pit crew got the job done in rapid order and Pearson returned to the track still seven seconds to the good.

Twenty-one cars started the race but only nine were running at the finish. The third-place car, Jim Pardue, of North Wilkesboro, N.C., was five laps behind Pearson and Petty when the checkered flag waved. Pardue made two stops to change tires.

Welborn hit the rail on the third turn shortly after he lost the lead and gave way to a relief driver on the 162nd lap. Out for good on the 179th lap his car was 11th in the final standings.