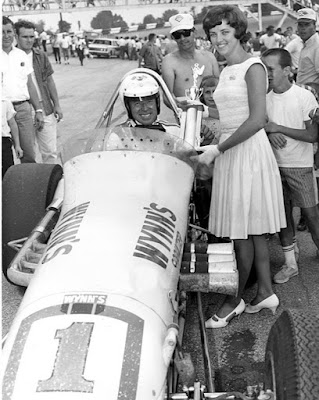 Don Branson is presented his trophy after winning the USAC sprint car feature at Salem.

Branson, of Champaign, Ill., hit an average of 93.1 miles per hour in the $5,000 main event. When the checkers flew, Branson had nearly a half a lap lead on the rest of the field.

Ronnie Duman of Indianapolis finished second, followed by Johnny Rutherford of Fort Worth, Tex., in third. Mario Andretti of Nazareth, Penn., was fourth and Roger McCluskey of Tucson, Ariz., rounded out the top five finishers.

Greg Weld of Kansas City, who was leading the USAC sprint car point standings before the race, finished eighth and Jud Larson of Indianapolis, another leading contender this season, was seventh.