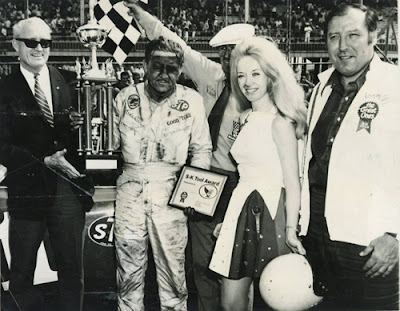 Des Moines, Iowa (July 12, 1970) - Lady Luck was gracious to Ernie Derr of Keokuk again Sunday when he won the Iowa 300 new-model stock car race at the State Fairgrounds after leading only the last 38 laps.

And it was a heart-breaking affair for Fred Horn of Marion. He led for 230 of the 300 laps before a crowd of 9,000 and lost the lead permanently to Derr because of “unnecessary pit stops”.

He also missed second-place money because of an accident on the 294th lap. He and Ron Hutcherson of Keokuk collided at that point and Horn later accused “Hutch” of deliberately running into him. Hutcherson, who was runner-up, denied doing so.

Horn’s car received severe damage to both left wheels, but he continued to stay in the race and nabbed third, two laps back of Derr and Hutcherson.

Derr, 48, who was initiating a 1970 Dodge Charger, had fallen two laps behind Horn when Fred pulled into the pits on the 259th lap. Horn wasn't in very long, but he had to return on lap 260 and 261 because the crew failed to get the gas cap back on.

Derr was able to close the gap and he worked his way inside of Horn in the second turn of lap 262 and surged ahead for his fifth career Iowa 300 victory.

He earned $1,200 for winning, received $100 appearance money as the defending International Motor Contest Association champion, was presented a check for $100 from SK Tool for being the mechanic of the winning car and also earned $60 time trial money for a total of $1,460.

His son Mike, celebrating the first anniversary of his racing debut, finished fourth, one spot better than he did in the 1969 150-mile event. He won $450.

Irv Janey of Cedar Rapids, who is runner-up to Derr in IMCA point standings and had been considered one of the top challengers to end Derr's current domination in this series, finished fifth and Mel Morris of West Liberty was sixth.

Eight mishaps brought out the caution flag for a total of 21 laps. There were no injuries or serious accidents.

Hutcherson, driving a 1970 Ford Torino, was the fastest qualifier, covering the half-mile in 26.49 seconds. He earned $100 for that and was paid $850 for finishing second.

The top six qualifiers were inverted, and Horn was placed on the pole position. He led for the first 10 laps then yielded to Morris.

Horn passed Morris on the 23rd circuit but Morris, who is working for rookie of the year award, went ahead again on lap 24 and held the lead through lap 43. From then on it was Horn until his fateful pit stop.

Derr had come on from nearly a half-lap deficit and tried to pass Horn on the 186th lap. However, Horn held him off and Derr went into the pits three laps later and fell nearly 2 1/2 laps behind before he returned to action.