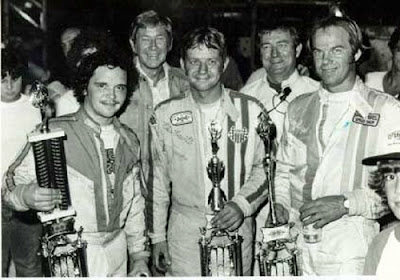 Doug Wolfgang was in process of celebrating his birthday, when his engine let go just four laps from victory lane.

Jimmy Boyd of Dixon, Calif., took over but Carson went high on the cushion and took command on the 23rd lap.

Carson pocketed $1,000 for his victory in the Bob Trostle sprinter.

Sonny Smyser of Lancaster, Mo., led the first three laps of the feature race before relinquishing the lead to Wolfgang.

Cheryl Burgard of East Berlin, Penn., one of the few women drivers too compete in the state of Iowa, managed a seventh-place finish in the B-main.

Boyd started out the evening with a victory in the first 8-lap heat, with Ralph Blackett of Des Moines winning the second. Wolfgang scored the victory in the third heat and Leland McSpadden of Tucson, Ariz., was the fourth heat winner.

Veteran Bill Utz of Sedalia, Mo., won the B-main with Bobby Marshall of Dallas, Tex., on his heels.

The program was sanctioned by the National Speedways Contest Association.