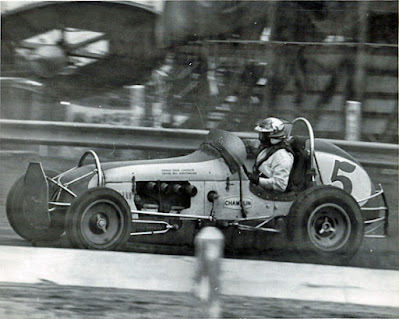 Horstmeyer was clocked in 6 minutes and 22.62 seconds by International Motor contest Association timer Verna Winkley. It broke the old mark (7:55.38) by more than a minute and a half set here by Jack Rounds of Huntington Beach, Calif., in 1958.

The 31-year-old electrical maintenance foreman for Oscar Mayer in Madison said after the race, “It helps when two guys are glued to your tail.”

He was referring to Jerry Daniels of St. Paul, Minn., driving a Buick conversion and Pete Folse of Tampa, Fla., behind the wheel of Hector Honore’s Offenhauser.

“It makes a difference,” Horstmeyer remarked. “I could hear them right behind me.”

Horstmeyer, married and the father of two boys, is a 16-year veteran of racing that includes stocks, motorcycles, midgets, and sprint cars.

Horstmeyer said his car started to pitch because of a broken right shock on the right rear. He was careful to avoid the holes on the third turn so as not to lose the lead he kept for all 15 laps.

The feature also brought a near serious accident – the crowd of about 3,000 gasped when Harold Leep of Wichita, Kan., sent his Offenhauser too high on the straightaway in front of the grandstand on the completion of lap 10.

Leep’s car bounced off the fence protecting the grandstand crowd. The car spun across the track and into the infield just behind the leaders and in front of the remaining 13-car field.

Leep, who set a new track record in time trials, had been running a close third behind Horstmeyer and Daniels when the accident occurred. Defending IMCA national champion Pete Folse moved into Leep’s spot.

Rutherford’s Beatson Chevy conked out in the 8-lap consolation. Harvey Konkel off West Allis won in a Chevrolet conversion in a new record time of 3 minutes and 28.52 seconds, eclipsing the old mark of 3 minutes and 38.35 seconds set by Ralph Donaldson of Jackson, Mich., in 1951.