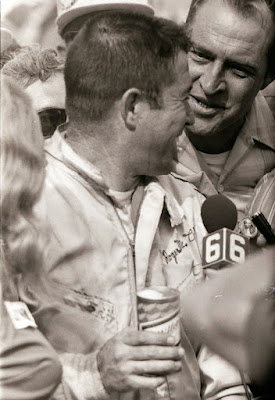 Roger McCluskey is congratulated by car owner Norm Nelson after his victory at Milwaukee.

West Allis, Wis. (July 9, 1972) – Roger McCluskey was the unofficial winner Sunday in the Miller 200 stock car race, with a protest by second-place finisher Jack Bowsher leaving the official result in doubt until Tuesday or Wednesday, according to United States Auto Club officials.

McCluskey, of Tucson, Ariz., passed Bowsher with four laps left when one of Bowsher's tires began losing air, then drove his 1970 Plymouth Superbird to what seemed to be a victory in the race at the State Fair Park one-mile track.

Bowsher, of Springfield, Ohio, had led for 119 laps in a 1971 Ford, and claimed afterwards he was leading at the finish.

He told USAC officials that instead of finishing five seconds behind McCluskey, he was actually ahead by almost a lap. He claimed he gained the advantage early in the race when McCluskey made two pit stops for tire changes.

USAC officials said their scoring tapes and charts, along with those kept by Bowsher, would be sent to Indianapolis for review, with a decision expected Tuesday or Wednesday.

McCloskey averaged 89.644 miles per hour in the unofficial victory, as 54 laps were run under caution flags for a series of minor accidents.

He said afterwards that he was afraid he was out of the race after his two early pit stops.

“When I had two tires go, I thought I'd had it,” he said. “But we switched to a harder compound tire, and they wore well.”

Bowsher's tire problems ended just after the race when the tire went completely flat, and the soft tire slowed him down noticeably.

“I saw Bowsher slowing down. He slowed even more, so then I thought I’d put the heat on him,” McCluskey said. “I didn’t run as hard as I could have, but it was enough to leave him behind.”