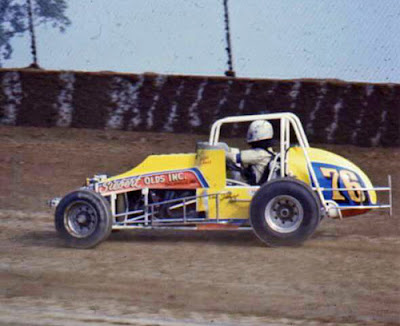 The race was the first on dirt at the track since 1967. Work began on the facility in early spring with the removal of the asphalt surface.

The first car to take to the new dirt surface was Dave Peperak’s #77. The times the drivers turned in at the revitalized track were not as spectacular as the opening, however, as the drivers struggled in their search to find the right route around the oval.
In their quest to achieve the ideal groove, speed was sacrificed for safety.

The track record of 19.12 seconds set by Parnelli Jones in 1962 remained safe. Larry Rice’s quick time of the day, 19.76 seconds, was a full six hundredth of a second off the 17-year-old mark.

As the day progressed, the track became more and more treacherous. Each qualification run and heat race left the surface more slippery.

By the time the feature race was run, the track was glass-like which made passing attempts rare.

The track was dampened before the feature, and Jones used that aspect to his advantage by taking the lead on lap 5. He started in the fifth spot.

The burning sun and cars’ pounding combined to quickly dry out the track again. That development slammed the door on Vogler’s hopes for a win.

Jones steered his sprinter nearly the entire 40 laps in the high groove, unfortunately for Vogler, because that was the only way he could have passed Jones.

In winning his sixth feature of the season. Jones increased his point total to 453, 29 better than Tom Bigelow.

Sheldon Kinser, Billy Cassella and Bigelow lost ground to Jones. Kinser and Cassella were forced out by mechanical troubles Bigelow ran the feature on seven cylinders after burning a piston earlier in the day

Pancho Carter, seventh in the standings, missed the event. He was driving his championship car at a race in Michigan.