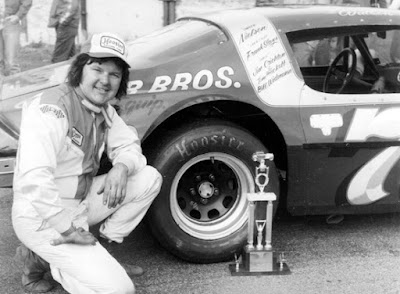 Kaukauna, Wis. (July 18, 1976) – Dave Watson, behind the wheel of the Nielsen Enterprises’ 1976 Camaro, flashed to victory in the second race of the “Red, White and Blue” State Championship Series on Sunday afternoon at Wisconsin International Raceway before a crowd of 5,691.

Watson, a former state titlist from Milton, took the lead on the 16th lap when he wrestled the spot away from Roger Regeth of Kimberly on the front chute.

Ray Young of Dolton, Ill., paced the field of 24 starters for one lap before Regeth put his Camaro into the lead. Regeth stretch his margin to six car lengths while Watson, the top qualifier in the 51-car field, began to move up. Watson moved into second position by lap 13 and began to slice at Regeth’s lead. In three laps, Watson took control of the race with his new car that had only been raced for one week.

The cars tightened up behind Watson on the 21st lap when a spin by John Reimer of Caledonia brought out the yellow flag.

John Ziegler, the defending state champion, moved into second place past Regeth on lap 29 with his 1975 Camaro. However, the Madison driver could not catch Watson and finished the 55-lap event five car lengths off the pace.

Doug Strasburg of Johnson Creek finished third in his 1973 Camaro followed by Joe Shear of South Beloit, Ill., in another 1973 Camaro and Dick Trickle of Wisconsin Rapids, driving a 1970 Mustang, and Regeth.

Pete Parker of Kaukauna led the 25-lap semi-feature until the last lap when he was passed by Conrad Morgan of Dousman as the two Camaro drivers entered the first turn.

Parker and Morgan had battled for the lead the entire distance and brought the crowd to its feet as they came out the fourth turn side-by-side with Morgan winning by mere inches in the lower groove.

Larry Schuler of Lockport, Ill., won the first 20-lap qualifier rather easily but the second 20-lap qualifier was much closer as Regeth outbattled Parker in the early stages of the event and held off Beloit’s Gary Hemmerling at the finish line.

Watson topped qualifications with a time of 20.812 seconds.