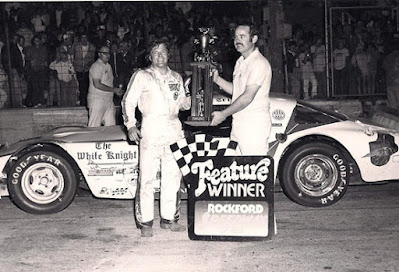 Loves Park, Ill. (July 11, 1978) – Dick Trickle inherited the lead with five laps to go and held on to edge Rusty Wallace in the 100-lap ARTGO-promoted late model special at Rockford Speedway, before the largest crowd ever to witness a stock car show in the recent history of the track, Tuesday night.

Mark Martin led the 22-car feature for the first 63 laps before heading to the pit area with an overheated engine. He held nearly a half-lap lead on hi nearest rival, Mike Miller, at the time of departure.

Miller, who had skillfully worked his way forward from his tenth starting position, inherited the lead when Martin withdrew and looked like a sure winner as the green flag remained out until the closing stages of the event.

With Trickle, Wallace, Neil Bonnett, Larry Detjens and Joe Shear dicing for the runner-up position, the yellow flag came out on lap 94 when the throttle in Leonard Reimer’s car stuck wide open, sending him into the fourth turn wall at full speed.

As the green flag was about to come out again, Miller detected a slow leak in his right rear tire, possibly cause by debris from Reimer’s accident, and pulled into the pits.

Miller’s visit to the pits turned first place over to Trickle, with Wallace in second place for the resumption of all-out racing.

Wallace tried desperately to pass Trickle in the final rounds and drew even with the pacesetter in turn one on the final lap, but Trickle was up to the challenge and surged to a half-car-length lead over the Missouri pilot at the finish.

NASCAR star Bonnett brought his short track car home in third and was followed by fast qualifier Ed Hoffman, who took fourth when Joe Shear spun after his car’s distributor cap broke on the final lap.

Miller, who restarted at the rear of the pack following his late pit stop, moved up three positions in the final five circuits and rounded out the top five finishers.

The mid-week special was the first ARTGO event ever run at Rockford and marked the first time NASCAR Grand National drivers ever competed on the quarter-mile track.