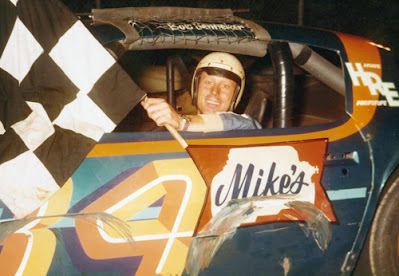 To facilitate driving with a broken leg, Senneker’s Camaro was equipped with an automatic transmission.

To start off the evening, Senneker, of Dorr, Mich., erased Jim Back’s two-year-old record on the third mile banked paved oval with a time of 14.375 seconds in qualifying. Marv Marzofka of Nekoosa and Senneker then finished in a dead heat in the trophy dash, before Senneker came from the back of the 20-car field to run away with the first 50-lapper.

He was in front on lap 21 and extended his lead by three-quarters of a lap at the checkered. That left Dick Trickle of Wisconsin Rapids and Marzofka to battle it out for runner-up honors. Trickle took that spot with Joe Shear of South Beloit, Ill., taking fourth ahead of Larry Detjens of Wausau.

Fall Creek’s Steve Burgess, Arnie Christen of Mineral Point and Tom Musgrave of Mundelein, Ill., showed the way in the second 50-lap contest before Senneker came from the back again to take over.

Traffic was heavier this time, though, as Senneker did not take over the lead until the 42nd circuit. In the eight remaining laps, he was able to build up a half-lap lead over second place Musgrave. Detjens finished third with Shear in fourth.

Doug Strasburg of Johnson Creek threaded his way through numerous spinouts for the semi-feature victory.