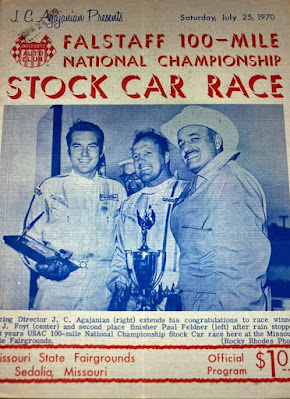 Sedalia, Mo. (July 25, 1970) – Don White, who had built a five-second lead over Roger McCluskey by the 95th lap, found himself pulling into the pits with his 1970 Dodge Charger the following lap with a blown engine and watching McCluskey take the checkered flag in the first-annual Falstaff 100 at the Missouri State Fairgrounds yesterday.

White, who was the United States Auto Club’s stock division champion in 1963 and 1967. held the lead in the national championship late model race for 74 laps; those came between the first and 50th laps and the 71st and 95th, when his engine gave way.

A massive 12-car pileup on the first turn of the initial lap delayed the race for approximately 45 minutes.

The accident occurred when Whitey Gerkin of Villa Park, Ill., clipped the rear end of Art Pollard’s 1969 Camaro, causing Pollard’s racer to spin off the inside guard rail. Cars behind Pollard were forced to spin themselves trying to avoid him.

As a result, six cars were forced into the pits, with damaged beyond repair for the day’s 100-mile feature event.

The only other crash of consequence came on the seventh lap when Glenn Bradley of Lincoln, Ill., flipped his Stocker coming out of the fourth turn.

Bradley was taken to Bothwell Hospital for X-rays, but his injuries were not believed serious.

McCluskey of Tucson, Ariz., spent the morning in Indianapolis, Ind. qualifying for today’s championship division road race. Following his qualifications run, he hopped in a plane and flew to Sedalia to run in the USAC stock car race.

Following McCluskey across the finish line was Butch Hartman of South Zanesville, Ohio, in a 1970 Plymouth.

Third and fourth positions went to Chrysler products as well. Third was grabbed by Verlin Eaker of Cedar Rapids, Iowa in a 1970 Dodge Charger, while Sal Tovella, Addison, Ill., behind the wheel of a 1969 Plymouth, finished fourth. Whitey Gerkin was the fifth-place finisher.

Keokuk, Iowa’s Don White set the fast time for the starting 30-car field with a clocking of 40.05 seconds and finished seventh behind Larry Berwanger. Eighth place went to Bay Darnell of Deerfield, Ill., in a 1970 Dodge Super Bee; Raybon Hinkle of Griffith, Ind., grabbed ninth place in a 1969 American Motors Rebel, while Paul Feldner, last year’s second-place finisher behind A.J. Foyt, was tenth in the cockpit of a 1969 Dodge Super Bee.

The highlight attraction of the late model show was to be A.J. Foyt of Houston, Tex., the defending champion of the Sedalia track in the United States Auto Club. Foyt, however, was confined to a bed in Indianapolis, suffering from influenzas.

Both his entry in the Falstaff 100 and today’s national championship division race at Indianapolis had to be withdrawn late Thursday.