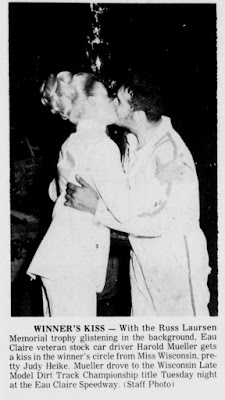 Eau Claire, Wis. (July 10, 1973) - Experience, like it has so many times before, paid off for Harold Mueller Tuesday night at the Eau Claire Speedway.

Mueller, the popular, long-time star of stock car racing in northwestern Wisconsin, added more sparkle to his glittering driving record by blazing to the victory in the Wisconsin Late Model Dirt Track Championship before 900-plus fans at the speedway.

The prestigious triumph made Mueller $500 richer and the new owner of the Russ Laursen Memorial Trophy. And he also got a well-deserved kiss from reigning Miss Wisconsin, Judy Heike.

The starting field of 12 top cars from Minnesota and Wisconsin was much smaller than expected for the event, but the race couldn’t have been much better even had there been 20 starters.

Giving Eau Claire a sweep of the first three places, Phil Prusak piloted his Chevrolet Monte Carlo to second place and Red Steffen, also in a Monte Carlo, stormed to the finish line in third place.

Mueller began the feature in the number five position beside Steffen, by virtue of his 19.71-second time trial. Prusak won the pole position with a 19.43 trial, while Cumberland’s Brent Laursen started in the number two spot (19.54). The second row had Rice Lake’s Jerry Amundson (19.61) on the inside and Tom Steuding of Eau Claire (19.69) on the outside.

The race began in perfect fashion as the green flag was dropped on a super tight-knit field. Mueller shot right into third place before one lap was over, although Prusak and Laursen were setting the pace.

Prusak and Laursen continued their dogfight until, going into the first turn on lap 4, Laursen charged into the corner too hard and collided with Prusak.

Both cars got crossed up momentarily by the contact and Mueller, close behind, quick as a cat, shot by on the inside and took the lead with a burst of power.

Prusak made an impressive move and assumed second place behind the fleeing 1973 Moose Peterson Chevrolet Laguna, driven by Mueller. The incident involving Laursen and Prusak allowed Amundson to move into third place.

At the halfway point in the 30-lap event, Mueller was steadily building on his lead, with Prusak second, Amundson third, Steffen fourth, Kenny Mann fifth and Leon Plank sixth.

With 20 laps gone by, Mueller began weaving his way past the slower cars, but most of the attention was on Prusak and Amundson, who were in a stiff battle for the second spot.

Near the end of lap 23 at least four cars bunched up heading out of turn four. Amundson, Plank and Mann tangled together and drifted toward the guardrail.

The bunch broke up without much damage, but Amundson, who got caught in the middle, lost considerable ground. The incident gave Mueller and Prusak a few precious seconds to move away from the rest of the field and Amundson chose to drop out in lap 24.

With Mueller cruising comfortably, the grueling race concluded, with virtually no place changes in the last six circuits. Mueller's winning margin was in excess of one-fourth lap over Prusak. Steffen was about five seconds behind the second place Prusak.

Mueller’s championship race victory came just 11 days after he made the switch from the asphalt circuit to finish the season on dirt tracks.