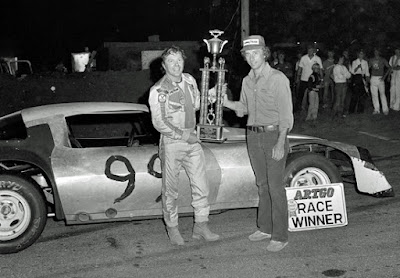 “It’s almost new,” Trickle said of the car he drove to victory in the first 50-lap feature and to third place in the second contest.

“It seems like it’ll be a good car,” added Trickle of the car, assembled from bits and pieces of Jim Bohmsach’s 1974 Nova. “We took some parts off of Boomer’s car like the roll cage, rear end and brakes. The rest of it is all new. We started the car in the spring and were about half done, working on during our spare time.”

But half done wasn’t good enough after a crash at Berlin, Mich., two weeks ago destroyed his 1978 Firebird. Trickle also suffered a concussion in the crash which left him bruised up for four days.

Working virtually day and night, Trickle and his crew were able to complete construction of the car in time for the ARTGO special.

Trickle took the lead from Joe Shear of South Beloit, Ill., on lap 33 with the duo battling for the top spot for the remaining 17 circuits.

Three yellow flags slowed the first feature with the final one coming out when Larry Detjens of Wausau spun out in turn one.

“I was just trying too hard,” said Detjens, who was running third at the time.

Detjens’ spinout may have cost him overall honors as the former rodeo star came back to capture the second feature.

Detjens took the lead from Shear on lap 25, building his advantage to four-car-lengths before Steve Burgess of Eau Claire spun out with one lap to go.

“The car was running really good,” Detjens remarked, who added that he wasn’t worried about the restart.

“There’s a chance you can get bumped when you get bunched up like that,” he said. The victory was the first of the season for Detjens on his home track.