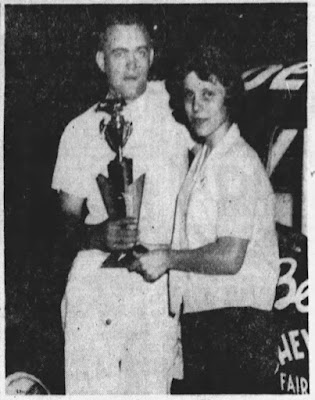 Waterloo, Iowa (July 16, 1961) – “We played it cool” and “It was running hot” were the remarks made Sunday by winner and runner-up after the 50-lap mid-season championship had concluded before a near-record crowd of 5,860 at Tunis Speedway.

Bill Zwanziger, Waterloo, proved why he’s the leading point man in the Cedarloo Racing Association, as he out-raced Stanwood’s Charlie Moffitt for the title.

The crowd was 12 short of the all-time paid attendance record of 5,872, set in 1957. Track officials also estimated that approximately 2,500 children watched for free.

Zwanziger was in contention the entire way but trialed Gene Peterson, Arnie Spore, both of Waterloo, and Moffitt for most of the race.

On the 40th lap, Zwanziger, the point leader at Tunis for the last four years, powered past Moffitt for the lead and pulled ahead to win.

“We made up our minds to play It cool,” said Zwanziger, speaking for himself and car owner Gordon Bentley, Fairbanks.

Moffitt credited his antifreeze from keeping his water from boiling over. On lap 13, his crank pulley snapped and caused the car to heat up. “It was running hot, and I was lucky to finish,” said Moffitt.

Zwanziger was the fourth driver to lead in the 50-lapper.

Bob Hilmer, Dysart, was way out in front and running well for the first 15 laps when his engine suffered a broke valve, forcing him to the pits. Moffitt was second at the time and took over the top spot and kept the lead for the next 12 laps before action came to a complete halt on lap 27. Bob Dautremont, Iowa City, rolled his car several times but was uninjured.

Shortly after the restart, spore temporarily took over as Moffitt was forced to go to high ground on the track in order to keep his engine cool. Dirt in his spark plug holes slowed Spore down, allowing Moffitt to take over the lead again.

Zwanziger took over the second spot by this time and trailed Moffitt by less than a car length for five circuits.

The finish was a reversal of last season’s finish when Moffitt won the mid-season title over Zwanziger.