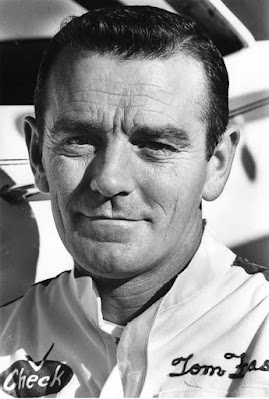 Topeka, Kan. (July 4, 1972) – Tom Frasher of Jefferson City, Mo., was the eighth and last driver to lead the Kansas 200 at the Mid America Fairgrounds on Tuesday night as he took the lead on lap 197 of the 200-lapper and went on to pocket the $800 first place money for his first-ever IMCA late model stock car victory.

It was the most-wide open marathon Topeka fan had witnessed in many years with mechanical problems and hard-driving taking their toll as first one leader and then another fell by the wayside.

Jerre Wichman of Kansas City held the lead the longest, while Irv Janey of Cedar Rapids, Iowa and Mike Lutkie of Wichita, appeared to have things in command while they led the pack.

But always right in position to move up if the opportunity presented itself was Frasher, making his first IMCA start of the season and one of the rare ones of his career.

From the 100th lap on, Frasher, in his 1969 Camaro, was never farther than off the pace than third, but by lap 180 he had fallen a lap behind Wichman.

Wichman’s Chevelle needed gas on lap 185 and while he was taking on fuel, Frasher got back on the same lap with the leader.

Wichman, driving without brakes for the last 50 circuits, was obviously in trouble as Frasher was finding the hard, slick racing surface to his liking and gobbling up large chunks of ground on each lap.

By lap 196, Frasher was in a challenging position and a lap later powered by Wichman. Frasher would pull away the remaining couple of laps and win by several car lengths at the checkered.

Wichman took the lead for the first time on lap 63, getting by Jim Hager of Liberty, Mo. He held it until Mike Lutkie took over on lap 122.

Once in the lead it appeared that there would be no catching Lutkie and his 1969 Camaro. He stretched his margin to nearly a full straightaway.

He would have to pit on lap 144, ending any hope for victory. When he returned to action, his engine blew and he was out of action by lap 152.

Janey, the current IMCA point leader, shoved his 1970 Plymouth into the top spot on lap 12 and was obviously the best combination on the track until his steering broke on lap 36. He got that repaired and was back on the track by lap 62 and would finish eighth in the end.

Gerry Harrison, winner of the Memorial Classic and a pre-race favorite, blew the engine of his Cougar in warmups while Schaefer exited with a broke fan belt. Randol had handling issues and Dell Schmidt spent most of his time in the pits with assorted mechanical woes.