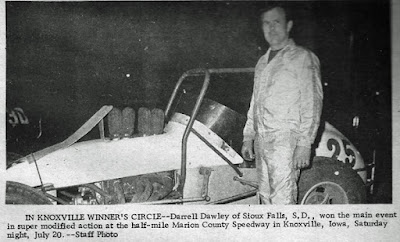 Knoxville, Iowa (July 20, 1974) – “The track was good, and the car felt great. I think we’re getting the car in shape,” Daryl Dawley of Sioux Falls, S.D., summing up his third feature win at the Marion County Fairgrounds this season. Until 1974, feature wins had eluded Dawley, who now possesses three.

Roger Rager of Mound, Minn., led the first two circuits of the 20-lap finale until engine failure led him to the pits. Eddie Leavitt of Kearney, Mo., took over and was on top for the next three laps until Dawley charged by him on lap 6 and ran untouched the rest of the way.