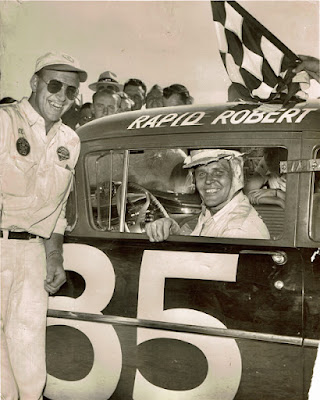 An estimated 7,000 fans watched as Hilmer, making only his third start in International Motor Contest Association stock car competition, take the lead away from “Wild” Bill Harrison of Topeka, Kan., on the 136th lap and hold on the rest of the way in the 200-lap grind.

Second place went to IMCA veteran Herschel Buchanan off Shreveport, La., making his comeback in a 1955 Thunderbird, which he flipped earlier this year. It was his first race since recovering from injuries sustained in the crash.

Third place went to Delmar Donaldson of Burlington, Iowa, in a 1955 Oldsmobile. He also completed the 100 miles without stopping.

Winding up 11th was Marshall Gardner of Worthing, S.D., one of the kingpins of the Sioux Falls modified ranks.

White, the defending IMCA stock car national champion, was plagued all afternoon long by an overheating engine in his 1955 Oldsmobile. His six pit stops dropped him back to a 12th place finish.

But the “Keokuk Komet” wasn’t the only driver beset by mechanical headaches.

Harrison, the balding veteran, who set a new one-lap track record with a time of 31.48 seconds in time trials, led the race from lap 98 until lap 136 but was forced back by two pit stops. He still finished fourth after a fine bit of driving.

Bob Potter of Duluth, Minn., driving a glittering new 1955 Chevrolet, also broke the former one-lap record of 31.81 seconds previously held by White but could never get going during the race and finished 13th.

“Starvin’ Marvin” Copple, the Lincoln, Neb., banker drove a beautiful race in his checkerboard-top 1955 Chevrolet before being forced to the sidelines after 72 laps with a burned-out wheel bearing. He was leading at the time after having been forced to start at the rear of the 20-car field because mechanical issues had kept him out of time trials.

Harrison, starting on the pole, took the lead at the start of the race and held it until White passed him on lap 10.

White, really sailing, stayed in front until lap 34 when he made the first of his six pit stops. Harrison took over again and held the top spot until Copple powered past him on lap 56.

When Copple pulled into the pits on lap 72, Hilmer took over first. Harrison wrestled the lead away from the young Iowan on lap 98 and then kept it until Hilmer zoomed ahead on lap 136 and never relinquished from there on to the checkered.

Hilmer was overjoyed at winning his first big race. He has six years of modified stock car experience under his belt in Iowa and last year won the Hawkeye Racing Association title.

A trucking line operator when he’s not racing, he had driven in only two previous IMCA late model stock car events, taking third at Owatonna, Minn., and sixth at Topeka, Kan.