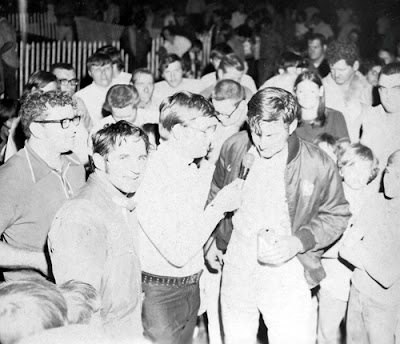 Davenport, Iowa (June 6, 1972) – Ramo Stott – starting on the pole position and then dropping as far back as tenth – steadily worked his way back to the front and hung on for a victory in the 100-lap Mid-Continent Open Invitational at the Mississippi Valley Fairgrounds on Tuesday night.

Stott, another one of those famous drivers from Keokuk, Iowa, outdueled John Moss of Iowa City and NASCAR star Bobby Allison of Hueytown, Ala., for the $1,000 first prize.

Sonny Morgan of Blue Earth, Minn., and Ed Sanger of Waterloo nailed down the next two spots to round out the top five finishers.

The crowd of close to 6,000 came to see Allison, the winner of more than a quarter of a million dollars last season and he didn’t disappoint. But credit Stott and Moss, for that matter, with a fine job of driving to finish ahead of him.

“It was a tough haul,” grinned Stott, one of the leading drivers last season on the United States Auto Club stock car circuit and winner of three features at Hawkeye Downs Speedway thus far this season where he is racing regularly.

By posting the night’s fastest qualifying time, Stott started on the pole but lost it almost immediately.

“For a moment I thought I had a flat tire, so I backed off so I wouldn’t cause a wreck. I dropped back quite a few spots and thought I was done. During the first caution my crew signaled to me that I was fine, so I went full-throttle from there on.”

Stott eventually moved his way back through the field, getting by Moss for the top spot about three-quarters of the way through the race. For the final 25 laps, Stott fought off the charges of both Moss and Allison but managed to hold on for the victory.