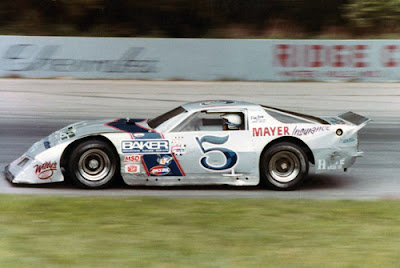 Shear took the lead on lap 28 of the 150-lap feature and held it until all cars were required to make a pit stop on lap 91.

Shear, however, failed to get his 1982 Firebird started following his pit stop because of ignition problems and was forced to retire.

Sauter, who was running second to Shear when the mandatory pit stop took place, found himself in the lead when he came out and kept it the rest of the way.

“We had that same problem at an earlier race,” Sauter said, referring to Shear’s ignition problem. “But we were able to get it fixed.”

Sauter, who also drove a 1982 Firebird, was plagued with yellow flags after he took the lead.

He held a lead of eight car lengths over Dave Watson on the 105th lap. But Terry Baldry and Conrad Morgan slid together in the first turn and that brought out a yellow flag.

On lap 118, cars driven by Al Schill, Ron Bloomberg, and Mike, Miller, Jim Weber and Tracy Schuler piled up near the lower guardrail on the backstretch.

The yellow came out on the final lap when a slow-moving car hit a guardrail coming out of turn four, forcing Sauter to beat Watson in a one-lap dash to victory.

He was running third midway through the race when his car suddenly stopped on lap 74. He moved into third again on lap 109, but his car came to a halt for a second time on the 117th lap.

Martin was driving Shear’s backup car. Like Shear, his troubles were with the ignition as well.

Top qualifier Tom Reffner was knocked out the race early along with J.J. Smith and Grant Wilson when those three were involved in an accident in turn one.